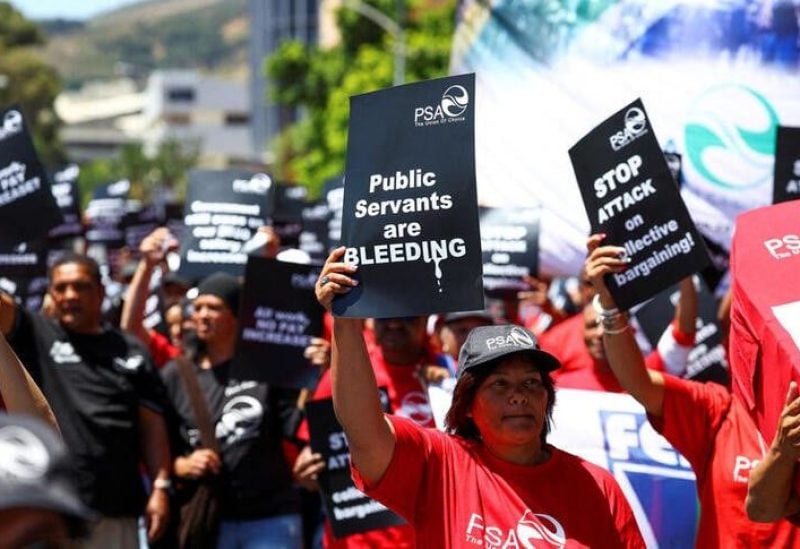 Members of the Public Servants Association of South Africa (PSA), one of South Africa's largest public sector unions, take part in a strike amid a pay dispute with the government in Cape Town, South Africa, November 10, 2022. REUTERS/Esa Alexander/File Photo

South African government employees will protest outside the National Treasury in the nation’s other eight provinces as well as the country’s administrative capital Pretoria.

At a news conference on Thursday, COSATU, the largest trade union federation in the nation, and other federations representing the majority of the more than 1 million employees of the public sector stated that they would keep protesting until the government improved its offer of a 3% pay raise.

Wage negotiations between unions and the government collapsed in early October, with the government subsequently saying it would unilaterally implement the 3% increase outlined in October’s mid-term budget.

The Treasury has been trying to rein in spending on civil servants’ compensation, which makes up around a third of consolidated spending.

“This is the beginning and it will go on until we declare an indefinite strike. Whether it happens now or early next year will depend on how government responds on November 22,” December Mavuso, deputy general secretary of the National Education, Health and Allied Workers’ Union, told reporters.

If the marches mushroom into a full-blown public sector strike it would be the first major one since 2010, potentially disrupting critical government services in places like hospitals and border posts.

The Public Servants Association (PSA), a union representing 245,000 civil servants, earlier this month held a separate march over the wage issue in Pretoria, handing over a list of demands. Union officials said on Thursday that the government had not yet responded to the PSA’s demands.