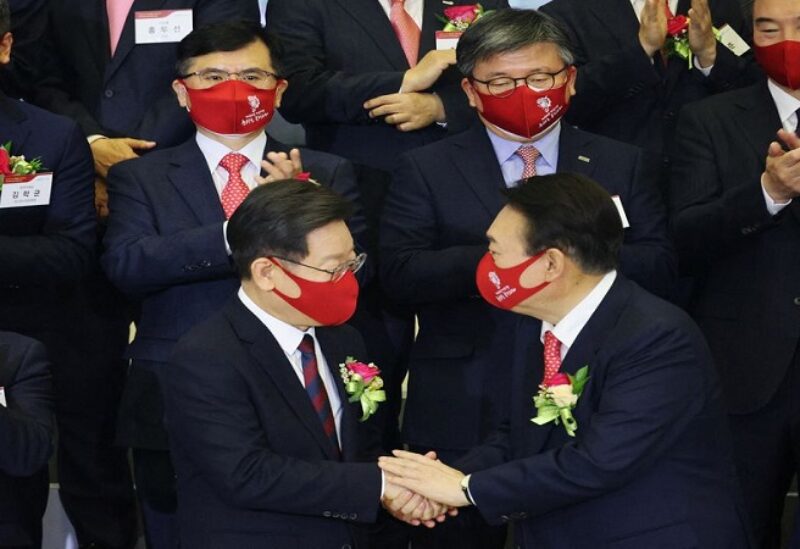 Deepening internal strife and a series of political blunders are throwing the campaign of the leading presidential candidate from South Korea’s opposition into disarray, sending his poll numbers nose-diving and giving a boost to rivals.

Yoon Suk-yeol, the flag bearer of the conservative People Power Party, is set to face off against his rival from the ruling Democratic Party, Lee Jae-myung, in the March 9 presidential election.

Housing prices and other domestic issues are largely expected to sway voter sentiment, but the election would shape Seoul’s balancing act between the United States and China, and how South Korea coordinates with Washington on North Korea.

Yoon, a former prosecutor-general and political novice, has maintained a tight lead in opinion polls for months, capitalising on public disillusionment with President Moon Jae-in’s policy failures, scandals and what voters see as hypocrisy among political leaders.

But Yoon’s ratings have fallen in recent weeks as he failed to present a policy vision and mediate in increasingly vitriolic infighting in his party, and was caught up in a controversy involving his wife.

Lee, meanwhile, has seen his popularity surge, overtaking Yoon in most polls since last week, despite a scandal over his son’s illegal gambling. A poll released on Monday by Global Research showed about 37% of respondents supported Lee, and 28% were for Yoon.

The infighting in the People Power Party took a fresh turn when senior members of Yoon’s campaign team offered to resign on Monday amid disagreement over replacing some of them, prompting Yoon to apologise and cancel his schedule for Tuesday to take time to think.

“I am fully to blame for making many people worry about the election, it’s because of my shortcomings,” Yoon told reporters late on Monday.

Yoon’s perceived shortcomings have also prompted the rise of Ahn Cheol-soo, a renowned software mogul and an opposition challenger who lost to Moon in a 2017 election.

The Global Research survey showed that more than 41% of South Koreans picked Ahn as the more appropriate contender and around 31% chose Yoon, if both camps agree to unite under one candidate.

Yoon’s campaign has said its priority was to ramp up support from young voters, not Ahn, while Ahn said he was willing to meet anyone but not considering a unified campaign.

Lee, who had previously sought to joint hands with Ahn, said on Monday that Ahn’s moves would be important but warned against any potential “collusion” between Ahn and Yoon.