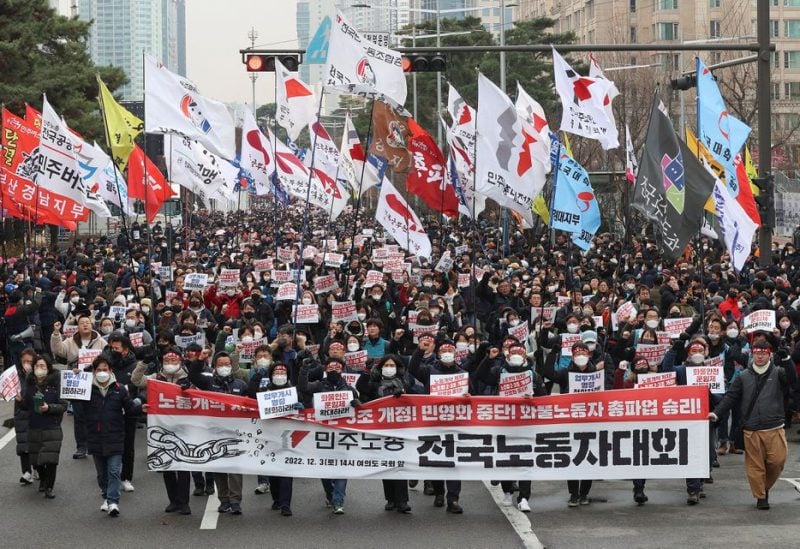 South Korean workers from the country's biggest labour union march during a rally in support of the ongoing strike by truckers near the National Assembly in Seoul, South Korea December 3, 2022. Yonhap/via REUTERS

South Korean President Yoon Suk-yeol on Sunday ordered preparations for widening a back-to-work order beyond the cement industry amid a prolonged truckers’ strike.

Thousands of South Korean truckers have been on strike for more than 10 days, with negotiators for the government and unions making no progress on disagreements over minimum pay rules.

Yoon, a conservative, on Tuesday invoked a “start work” order, the first in the country’s history, on 2,500 drivers in the cement industry, requiring them to return to the road or face penalties.

On Sunday Yoon called on government ministers to make preparations to issue a return-to-work order on such sectors as oil refining and steelmaking, where additional damage is expected, spokesperson Lee Jae-myoung said in a statement.

Yoon called for punishment of those violating laws during the strike, ordering ministers to take action to minimise damage, such as employing alternative drivers, military personnel and military equipment.

The Korean Confederation of Trade Unions, an umbrella group, is planning a general strike for Tuesday.

“I cannot but regard this planned strike as a politically motivated action, rather than one aimed at representing the workers’ rights,” Yoon said, according to Lee, signalling a potentially harsh reaction from the government.

“Holding the people’s living and national economy hostage at this time of economic difficulty makes the survival of weak, unorganised workers harder and deprives future generations and the general public of their future jobs,” Yoon said.

The government has said it would not expand a minimum pay system for truckers beyond a further three years. The union says it should be permanent and wider in scope.

Thousands demonstrated in downtown Seoul on Saturday in support of the truckers’ demands.