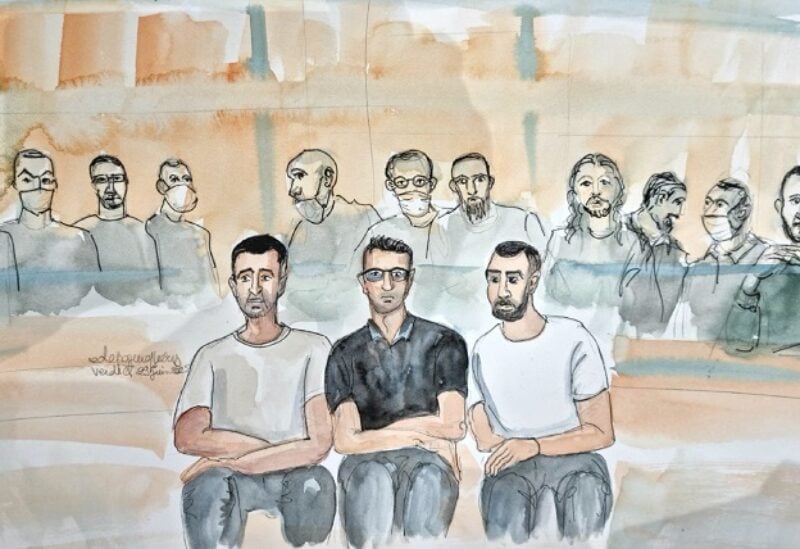 An artist's sketch shows Salah Abdeslam (R), one of the accused, who is widely-believed to be the only surviving member of the group suspected of carrying out the attacks, and the other accused during the verdict in the trial of the Paris' November 2015 attacks at the Paris courthouse on the Ile de la Cite in Paris, France, June 29, 2022. Elisabeth de Pourquery/France Televisions via Reuters NO RESALES. NO ARCHIVES

Salah Abdeslam, was handed the toughest life sentence in French law for being a part of a series of bombings and shootings across Paris that killed 130 people and injured more than 490.
Abdeslam, the only surviving member of the 10-man group that carried out the November 2015 Paris attacks that left 130 people dead, was found guilty of murder and was sentenced to a lifetime prison sentence without any possibility of parole on Wednesday. Abdeslam, who is a Brussels-born French citizen,
Abdeslam was found guilty by the court of all five counts he was charged with, and he became the fifth person ever to be handed a life sentence without parole in France since it was legalised in 1994.
The judgement came after one of the biggest criminal trials in French history and Abdeslam was the only living member of the group of terrorists as nine others either killed themselves or were shot by the police since the Islamic State-backed series of attacks in Paris on November 13, 2015.
Abdeslam stayed hidden in Brussels after leaving France but was ultimately arrested in March 2016 following a shootout with the Belgian police. The French police accused him of planning the attacks and after the ten-month long trial, he was finally found guilty on all five counts.
“I’ve made mistakes, but I’m not an assassin. I’m not a killer. If you convict me for murder, you will be committing an injustice,” Abdeslam told the court this week according to Reuters.

“My first words are for the victims. I have already said sorry. Some will say my apologies are insincere, that it is a strategy … more than 130 dead, more than 400 victims, who can apologise insincerely for so much suffering?”