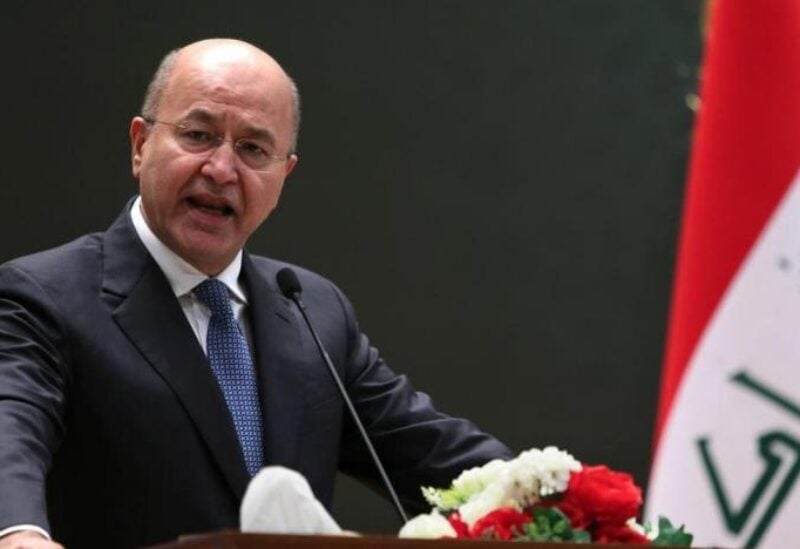 Iraq should not be used as a proxy to settle regional conflicts by its more powerful neighbors Iran and Turkey, said the Iraqi President Barham Salih.

Speaking at an event hosted on Wednesday by the Council on Foreign Relations, he added that Iran might be wary of Iraq’s reemergence as a regional power in the future, but that both countries should maintain ties based on mutual respect.

Iran maintains a powerful influence on Iraqi domestic politics through political parties and militias that receive political and financial support from Tehran.

Salih, who is attending the 76th session of the UN General Assembly in New York, said Iraq and Iran should treat each other as “sovereign states.”

He added that he met with Turkish President Recep Tayyip Erdogan on the sidelines of the UNGA, and discussed bilateral relations and Ankara’s incursions into Iraq in pursuit of Kurdish militants.

Salih said recent droughts and the loss of agricultural land, mainly due to dams built by Turkey and Iran that restrict the flow of water downstream to Iraq, are causing severe problems for his country.

Iraq depends for its agriculture on the Tigris and Euphrates rivers, which flow downstream to Syria and Iraq from Turkey.

An extensive Turkish dam system has restricted the flow of the rivers downstream, causing severe droughts in both Arab countries.

Similarly, Iranian dams have caused drought and economic hardship in Iraq, especially in the Kurdish region.

Salih said the situation will worsen as Iraq’s population of around 40 million is projected to double by 2050.

He stressed the need for Iraq to establish long-term economic planning to address an eventual drop in its oil sales — which represent the majority of its income — due to emerging technologies that do not depend on oil.

Salih discussed Iraq seeking stronger economic ties with Jordan and Egypt, including connecting the three countries with a common electrical grid and building an Iraqi oil pipeline that goes through Jordan.