Salman Rushdie on ventilator; may lose an eye, unable to speak 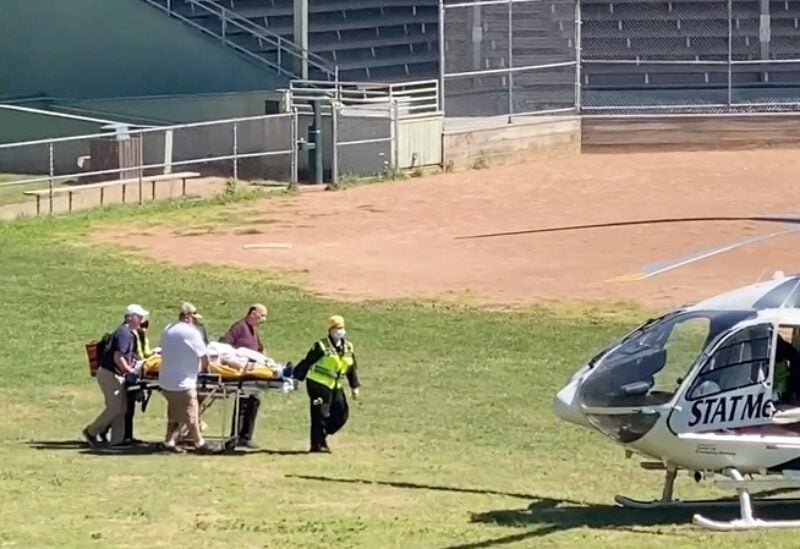 Author Salman Rushdie is transported to a helicopter after he was stabbed on stage before his scheduled speech at the Chautauqua Institution, Chautauqua, New York, U.S., August 12, 2022, in this screengrab taken from a social media video. TWITTER @HoratioGates3 /via REUTERS THIS IMAGE HAS BEEN SUPPLIED BY A THIRD PARTY. MANDATORY CREDIT.

Salman Rushdie,75, who was stabbed in the neck and the abdomen at an event in Chautauqua Institution near Buffalo city, underwent emergency surgery and may lose an eye, reports said.
After the surgery, Rushdie was put on ventilator support and was reportedly unable to speak.
Rushdie’s book agent Andrew Wylie said the writer’s nerves in his arm were severed and his liver was stabbed and damaged. Wylie informed Rushdie “will likely lose one eye” due to the attack. A doctor in the crowd attended to Rushdie quickly as emergency services arrived on the scene even as people rushed to the writer’s aid after the attack amid confusion.
The moderator at the event Henry Reese suffered a minor head injury. The police are yet to find a motive for the attack. The assailant has been identified as 24-year-old Hadi Matar. Police said Matar acted alone, however, investigations are still underway.
UK Prime Minister Boris Johnson said he was “appalled” by the stabbing. Rushdie was earlier living in the UK but had shifted to New York. However, he continued to be a target amid threats and boycotts. In 2007, Rushdie’s knighthood had sparked largescale protests in Iran. Khomeini’s successor as supreme leader, Ayatollah Ali Khamenei had said three years ago that the fatwa against the writer was “irrevocable.”