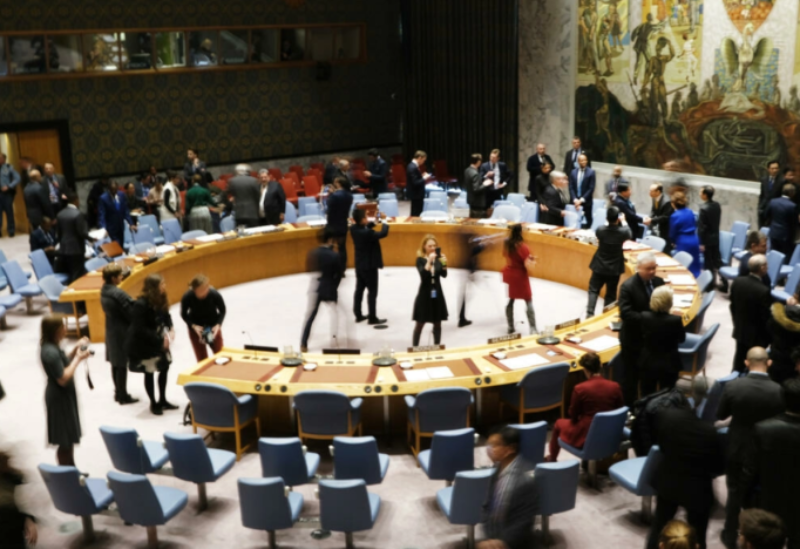 “The coalition states will spare no effort to defend themselves” said the Saudi permanent representative to the UN on Monday calling on the Security Council to take stronger action against the Houthis if the Iran-backed militia continues “to stall and reject peaceful solutions” to the conflict in Yemen.

Ambassador Abdulaziz Alwasil said that designation of the group as a terrorist organization has become an urgent demand among the people of the region, “who want to live in peace.”

His comments came during a Security Council meeting to discuss the latest developments in Yemen.

Hans Grundberg, the UN’s special envoy to the country, who briefed the council from Sanaa, highlighted the recent “intensification of regional and international diplomatic activity to resolve the conflict” and reiterated his “appreciation for the efforts of Saudi Arabia and Oman in this regard.”

“We are witnessing a potential step change in the trajectory of this eight-year conflict,” Grundberg told the council. He added that “the ongoing dialogues are a possibility that should not be wasted and that demands responsible actions.”

However, he cautioned that “without an agreement that includes a shared vision for the way forward, the state of uncertainty will persist, and with it an increasing risk of military escalation and a return to full-blown conflict.”

The Swedish diplomat urged all parties involved in the conflict to make the most of the opportunity for dialogue provided by the pause in large-scale fighting, and to “work expeditiously toward a shared vision with concrete, actionable steps.”

Alwasil commended Grundberg for his “relentless, unique and quality efforts to ensure peace in Yemen.” He also reiterated his country’s support for the efforts of the UN’s humanitarian chief, Martin Griffiths, “to alleviate the suffering of the brotherly Yemeni people.”

The Saudi envoy told the Council that although the Houthi militias refused to extend a ceasefire agreement in October last year, the UN — as represented by Grundberg and in cooperation with Saudi Arabia, the UAE and Oman, and with Yemen’s presidential leadership council — continues in its efforts to secure a comprehensive political solution that ends the suffering of the Yemeni people.

“The Houthi militias did not extend the truce for political reasons,” Alwasil said. “They reneged on their commitment at the last minute and canceled most items agreed upon.

“They proposed new demands, including paying the salaries of militiamen in US dollars. They refused to implement their commitment to deposit the profits of Al-Hodeidah port in the Central Bank so that they can be used to pay the salaries of all Yemenis. Neither did they lift the siege that has been imposed on Taiz since the coup.”

The legitimate government, on the other hand, has put the interests of the Yemeni people first, Alwasil said, and has not reneged on its “noble humanitarian and national commitments.”

It “did not renege on the concessions” it had made, he added, pointing out that “Sanaa Airport continues to work; commercial and humanitarian flights continue; main ports are working smoothly and naturally.”

On the other hand, the Houthis, he said, continue to break international laws by “disseminating terrorist and extremist ideologies in schools, recruiting children, sending them forcibly to fight, besieging the city of Taiz, arbitrarily detaining activists and journalists, killing opposition leaders, imposing taxes on humanitarian work, looting international assistance and sending it to those who do not deserve it, including to the Houthis themselves, as well as planting mines arbitrarily, leading to the killing and injury of innocent civilians.”

Last month, Gen. Michael Beary, who heads the UN Mission to Support the Hodeidah Agreement, narrowly survived a bomb blast when his armored convoy hit a landmine while he was traveling with members of the Houthi militias to oversee the decommissioning of explosives.

Alwasil said that the Houthis also inflict collective punishment on the civilian population, depriving areas outside their control of basic services and amenities, and targeting the export of natural resources, the profits from which should be used to pay civil servants and teachers.

He added that since the coup in 2014, the Houthis have held the Yemeni population hostage and weaponized the dire humanitarian situation in the country in an attempt to blackmail the international community, all while threatening the security of the wider region and the world.

“Hodeidah remains full of mines (making) the port a threat to international peace and security.”

Alwasil thanked the US, whose Navy last week seized from a ship in the Gulf of Oman more than 2,100 assault rifles officials believe originated in Iran and were bound for the Houthis.

Alwasil concluded by reiterating that “the coalition states will spare no effort to defend themselves in case such malicious acts target our security and interests in any way. We will respond firmly and strongly.”