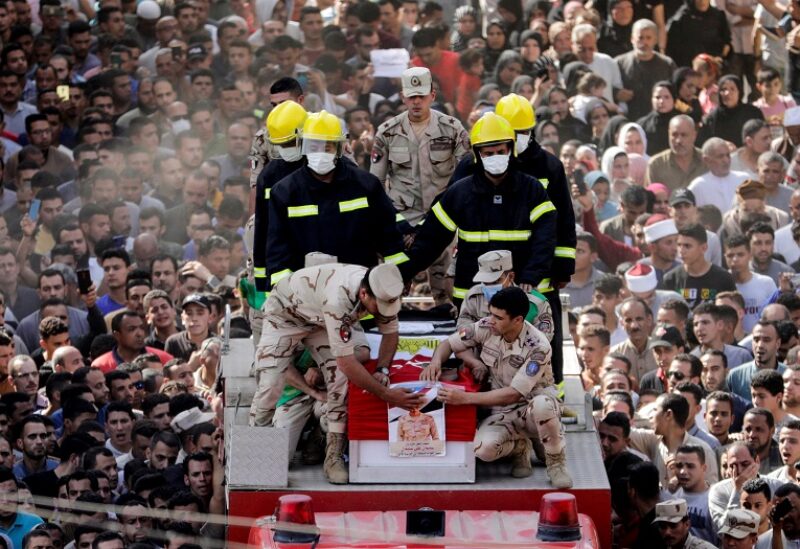 Mourners and soldiers accompany the coffin containing the body of Egyptian officer Soleman Ali Soleman, who was killed in an armed attack claimed by Islamic State on Saturday in Egypt's Sinai peninsula, during a funeral at his home village Jazirat al-Ahrar, in Al Qalyubia Governorate, Egypt, May 9, 2022. REUTERS/Mohamed Abd El Ghany

The terrorist attack that targeted Egypt’s northern Sinai, killing and injuring a number of Egyptian troops, was strongly condemned by Saudi Arabia.

Five Egyptian military personnel were killed in a militant attack on Wednesday and four others were injured when armed men opened fire at a security post in the coastal area of northeastern Sinai.

The Ministry of Foreign Affairs reiterated the Kingdom’s stand and full support for Egypt in its efforts to combat terrorism and extremism, the Saudi Press Agency reported early Thursday.
Saudi Arabia extended condolences and sympathy to the families of the victims and to the Egyptian government and people and wished the injured a speedy recovery.

The recent attack follows a May 7 ambush at a checkpoint in Sinai that killed 11 Egyptian soldiers and was claimed by Daesh, one of the deadliest attacks in recent years.

Egypt expanded security control over populated coastal areas of northern Sinai since a major counter-insurgency operation was launched in 2018, but sporadic attacks by militants linked to Daesh have continued.