Saudi Arabia trying to provide solutions, not be cause of problem: Energy minister 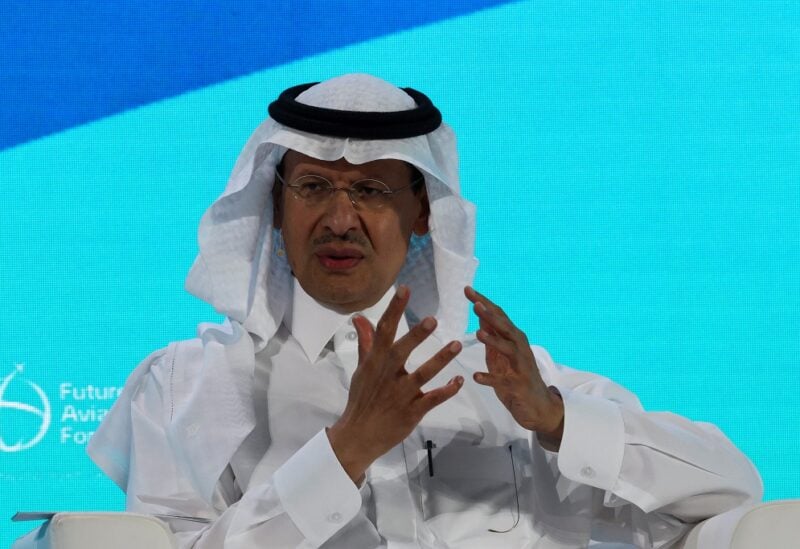 Saudi Arabia has taken steps to ensure that it is the “provider of solutions” rather than the “cause of the problem” when it comes to the world’s green energy transition, according to Saudi Energy Minister Prince Abdelaziz bin Salman in an interview with Al Arabiya at the Future Aviation Forum in Riyadh.

The energy minister highlighted that a more holistic and realistic approach is required to ensure lower carbon emissions.

“We are acting as a good global citizen, and we want to achieve these [sustainable goals]. We are taking it an extra step by being a part of the solution, or a provider of solutions, as opposed to being the cause of the problem,” he explained.

In regard to the aviation sector, the minister said that Saudi Arabia has been following a “circular carbon economy approach,” by engaging with plane manufacturers and service providers in the industry to address the future energy requirements of the sector.

“If you want to address the future requirement of the energy sector for that aviation sector, at both industries, the service provider and the manufacturer, you have to look at it holistically, at five different things… the body or the fuselage of the plane and how you could help in bringing more materials, different materials, to reduce the weight of the plane,” he said, noting that reducing the weight of planes can make great strides in reducing the industry’s energy consumption.

The minister noted that a 53 percent reduction in the weight of airplanes can lower their energy usage, and in turn, reduce carbon emissions. He also said that since the 1960s, there has been an 80 percent decrease in carbon emissions but added that engine efficiency continues to be a “continuous challenge.”

“… keep in mind that the service use and of flying had also increased in terms of size of traveling per hour, all of these things have increased and yet [we] managed 80 percent reduction of emissions.”

When it comes to the circular carbon economy, “what we are doing is that we are getting to the source itself, which is the refining itself by building the carbon sequestration component. And that component will mitigate emissions from the source which is the refinery plus the collected CO2. Believe it or not, you could create some more synthetic fuel out of it. So, it’s not going to go to waste,” he said.

“We will never leave any single molecule not to be used. This is not a frugal approach; it is the circular carbon economy approach.”

“Synthetic fuels will come out of the CO2 that is collected. I wait to see how biofuels will deliver us because in all the literature we review, I think only one percent would constitute biofuels being utilized by 2030. But we are not saying no to biofuels, we see these things will evolve over a much longer timespan because they are going through challenges of their own, including hydrogen,” Prince Abdelziz said, adding that the UK’s manufacturer of biofuel is Saudi company Alfanar.

“Trust me on this one, we are not in a juncture where we are into a cherry-picking approach. We have to look at all of the above and we have to be very mindful and effective in attending to sustainability goals, but not to go through that. You will never deliver that with the so-called cherry-picking approach. You cannot make a preconceived conclusion today and say, I will do this and that, but I will never allow [that].”

He noted that there are “quite a few” available options that need to be looked at and weighed, including electric cars and greening airports.

“I think the whole world congregated on the idea that we should try to provide solutions to emission reductions for all sectors of which we are, I think in agreement with simply because, again, it fits our holistic approach. That our holistic approach in terms of emissions, we went to reach out to all sectors, to all greenhouse gases and using every tool in our kit, even if the tool indicators are not available, we should work hard with others to provide these tools that would enable us in the future to move forward.”

Low carbon fuel will be used for a more realistic green energy transition, especially when it comes to the aviation sector, he said.

“We believe strongly that low carbon fuel, aviation fuel, is going to be the transition to the fuel for the future,” the energy minister said, adding that this was a more realistic approach than the “La La Land scenario on net zero.”

When asked about the impact of latest developments in the world on the pace of energy transition towards cleaner energies, he said that he does not expect the transition to be hindered, but that it will provide people with a “reality check.”

“Basically, it’s a reality check of how aspirations – be it good aspiration or decent aspiration – not how it can be compromised by the realities of the day. Now, crises and what have you can bring much more emphasis and much more focus. But even before the recent crisis, you still had a big argument,” the energy minister said.

“Ever since May last year, the so-called ‘La La Land’ scenario on network had been smacked with so many realities. One of them is cost.”