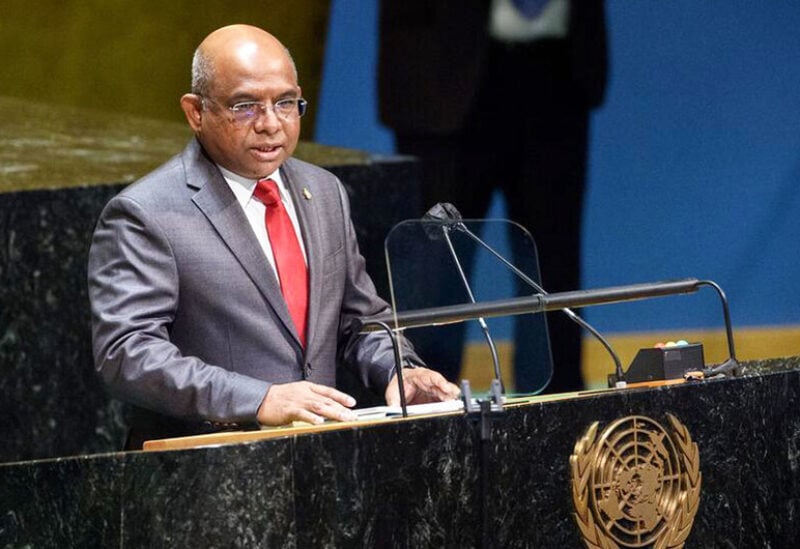 Maldives Foreign Minister Abdulla Shahid’s next political career could be the most important one, as he is the president-elect of the 76th session of the United Nations General Assembly and is preparing for his new task by traveling to various countries and taking in views on world diplomacy.

As the representative of a Muslim country, he understands the key roles played by fellow Islamic nations, particularly in the Arab world, especially in view of what is happening in Afghanistan.

“The global community stands with the people of Afghanistan,” Shahid said. “We are in support of an Afghani-led process in accordance with the wishes of its people. We call for cessation of any violence and ask for peaceful conduct and respect for human rights.”

Shahid explained that powerful Arab/Muslim countries such as Saudi Arabia and the UAE will play a key role in Afghanistan and other regional issues.

“I speak to the foreign ministers of Saudi Arabia and the UAE on a regular basis,” Shahid said. “Only last week I spoke to his highness Prince Faisal bin Farhan bin Abdullah about the basis of the presidential platform, which I will be taking over this mid-September, and also respective bilateral issues. We have very good relations not only at the government level but among our respective peoples, and more and more economic ties are being established. I see a lot of good things happening between us. The Maldives enjoys excellent and outstanding relations with both countries.”

Shahid is currently visiting Japan, where he is scheduled to meet Prime Minister Yoshihide Suga and Foreign Minister Toshimitsu Motegi.

Japan, much like the Maldives, is a key player in the Indo-Pacific region.

The Maldives is suffering from the global COVID-19 pandemic, causing the tiny Indian Ocean country to also experience an economic setback.

“At the end of March 2020, we were forced to close our borders, and for a country highly dependent on tourism we became a low-income country overnight,” Shahid said. “No visitors at all. The economy was the first casualty in the Maldives, even before we found the first case. The meager resources that we have had to be diverted to healthcare upgrades and materials, which meant we had to go away from development projects.”

Shahid said that he was grateful for the economic assistance of the G7 and G20 countries, and partners such as Saudi Arabia, the UAE and India. The Maldives took strict measures to enable it to restart tourist operations.

“We have islands and each hotel is on a separate island, and with very strict protocols at the airport we are able to take tourists from the airport directly to the island. As a result, there is a safe environment for tourism,” he said. “We are on the road to recovery again and we have a very high vaccination rate — about 83 percent of the population has had their first dose.”

Apart from health issues and economic troubles, the Maldives are also threatened by environmental problems as sea levels rise.

“The (UN) IPCC report underscores the problems that small island developing states like the Maldives already encounter,” he said. “We need to take action on the recommendations of the report, given the opportunities today, to make our economic systems more sustainable, our recovery efforts can be taken into account, lessons learned, we can rebuild sustainability. We can’t keep our eyes closed anymore.”