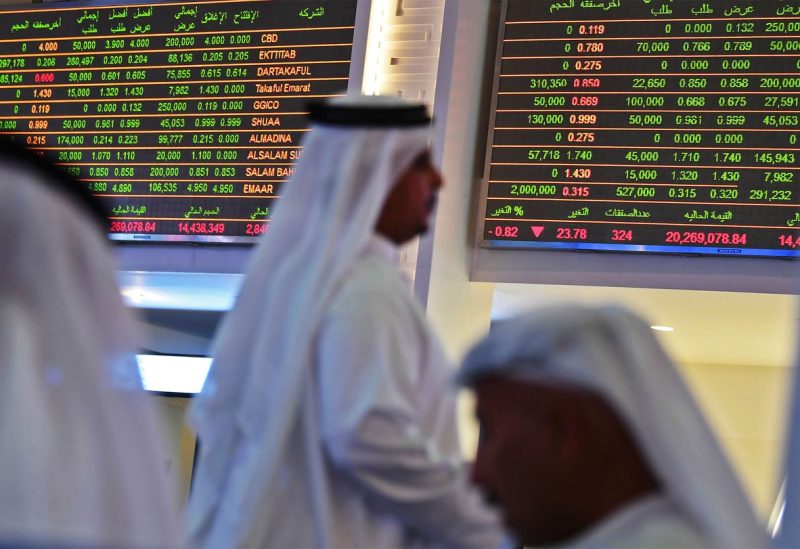 Traders sit below the stock market screens at the Dubai Financial Market in the Gulf emirate.Photographer: KARIM SAHIB/AFP

Crude oil prices, a key catalyst for the Gulf’s financial markets, gained around $1 as investor sentiment improved on news that China was considering a cut in the quarantine duration for inbound visitors.

The benchmark stock index in Saudi Arabia advanced 0.8%, led by a 1.3% rise in Al Rajhi Bank and a 3% increase in Riyad Bank.

Among other gainers, Saudi Aramco was up 0.6%, following a Bloomberg News report that the oil giant was pushing ahead with plans for an initial public offering of its energy-trading business by the end of this year or in early 2023.

No final decisions have been made and the IPO could be delayed or cancelled if market conditions worsen, the report added.

Dubai’s main share index added 0.2%, helped by a 1.2% gain in Emirates NBD Bank and an 8.4% surge in Deyaar Development.

Deyaar reported a surge in its third-quarter profit while revenues rose 72% on the back of a revival in the emirate’s real estate sector.

On Tuesday, the company’s board recommended shareholders approve a 500 million dirhams ($136.14 million) cash settlement with another Dubai-based developer, Limitless.

The United Arab Emirates believes OPEC+ made the correct technical choice when it agreed to cut production targets and the unanimous decision had nothing to do with politics, energy minister Suhail al-Mazrouei said on Tuesday.