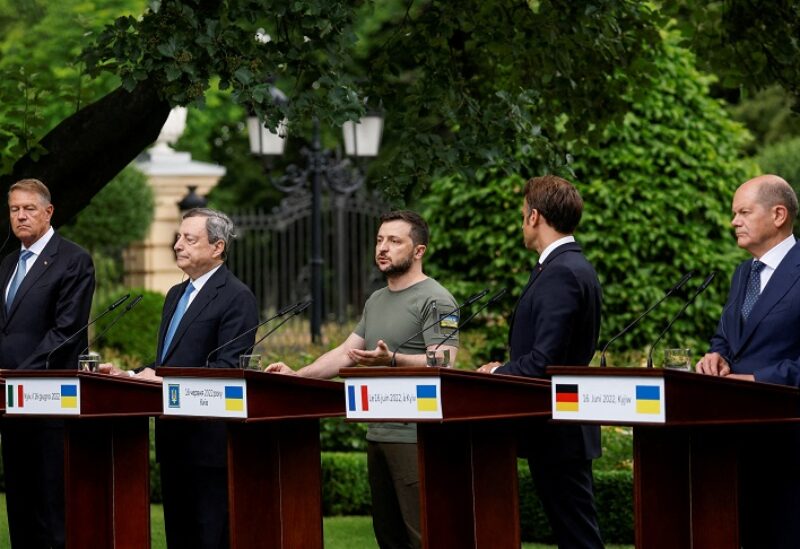 “We are at a turning point in our history. The Ukrainian people defend every day the values of democracy and freedom that underpin the European project, our project. We cannot wait. We cannot delay this process,” Draghi said in support of Ukraine’s candidate status.

“We are ready to work for our state to become a full member of the EU,” Zelenskyy said. “Ukrainians have already earned the right to go down this road and obtain this candidate status.”

During the press conference, Macron announced that Paris will deliver “six additional Caesar” mobile howitzers to Ukraine. Scholz vowed to provide military support for Ukraine for “as long as needed.”

Zelenskyy also said during the conference that the more weapons it receives, the faster it can take back occupied territory by Russia.

“Every day of delay or postponed decisions is an opportunity for the Russian military to kill Ukrainians or destroy our cities,” Zelenskyy said. “There is a direct correlation: the more powerful weapons we receive, the faster we can liberate our people, our land.”

Romanian President Klaus Iohannis condemned the “weaponization of grain” by Russia, saying it was having a global impact.

Scholz: Ukraine witnessing ‘unimaginable cruelty’
The European leaders condemned Russian brutality, and surveyed the destruction in the nearby town of Irpin earlier in the day.
Scholz said the town had witnessed “unimaginable cruelty” and “senseless violence.” Mass graves were found in the town of Bucha, which also lies near Kyiv.

Macron condemned the “barbarism” of Russian attacks and praised the local residents who fought back against Russia’s failed attempt to take territory surrounding the capital.

Draghi vowed the country will be rebuilt with European help.

“They destroyed the nurseries, the playgrounds, and everything will be rebuilt,” the Italian leader said.

In a Twitter post, Iohannis wrote there are “no words to describe the unimaginable human tragedy and horrible destruction” in Irpin.

A trip to show solidarity
“It’s an important moment. It’s a message of unity we’re sending to the Ukrainians,” Macron said shortly after the leaders arrived by train.

The trip comes amid criticism that European countries such as Germany are not doing enough to help Ukraine fend off the invasion.