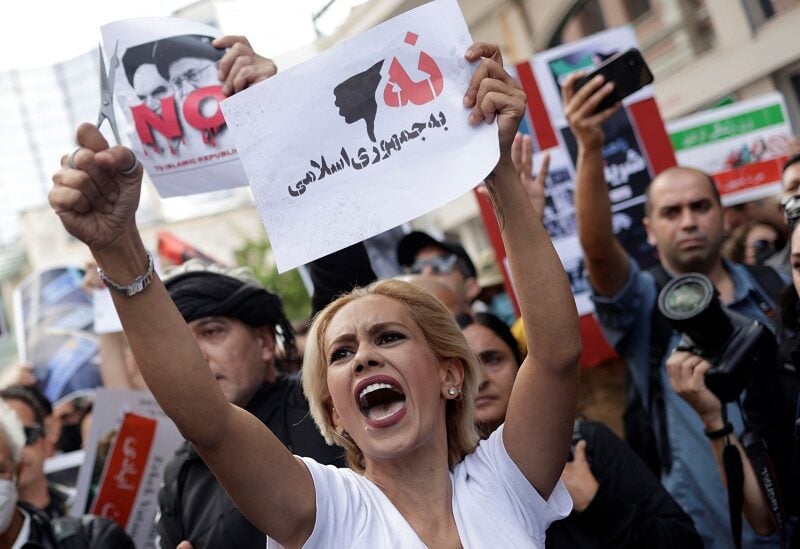 An Iranian woman living in Turkey shouts after she cut her hair during a protest following the death of Mahsa Amini, near the Iranian consulate in Istanbul, Turkey October 4, 2022. REUTERS/Murad Sezer

A series of videos, verified by the BBC, show teenage students across Iran waving their headscarves in the air and chanting anti-government slogans.

In a viral video, groups of hijab-less girls in Karaj were filmed chasing an alleged government official out of their school on Monday.

The girls appeared to be throwing empty water bottles at the man while yelling “shame on you” until he retreated through a gate.
In another clip from Karaj, a city west of Tehran, young students can be heard shouting “If we don’t unite, they will kill us one by one.”

On the same day, dozens of schoolgirls in Shiraz blocked traffic on a main road by waving their headscarves in protest against Supreme Leader Ayatollah Ali Khamenei. “Death to the dictator,” they chanted.
Similar protests were reported on Tuesday in Tehran and the northwestern cities of Saqez and Sanandaj.

Meanwhile, a group of girls in their classrooms were photographed hijab-less and making obscene gestures at images of Khamenei and the founder of the Islamic Republic, Ayatollah Ruhollah Khomeini.

The protests by the schoolgirls began swiftly after Khamenei broke his silence on the nationwide unrest by accusing arch-foes the US and Israel of instigating riots in the country.

The supreme leader also backed the security forces, who have reacted to the dissent with violent crackdowns.

Demonstrations have entered into their third week in Iran since the death of 22-year-old Amini, who fell into a coma while in the custody of morality police in Tehran after allegedly breaking the hijab law. She died three days later in hospital.