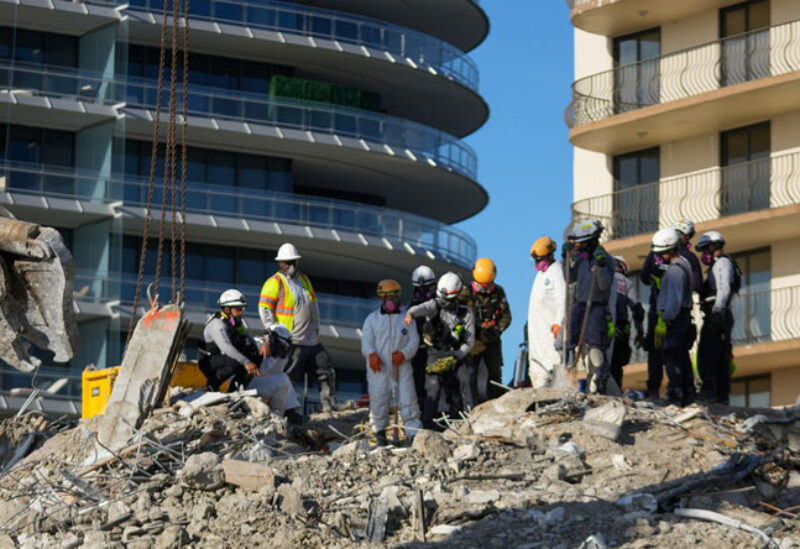 The death toll rose to 22 on Friday from the collapse of a Florida condominium tower after the remains of four more victims were found in the rubble, and local officials ordered a second residential complex evacuated after deeming it unsafe.

The move was considered urgent due to the approach of Hurricane Isla, which is forecast to hit Florida as early as Monday. The building’s owners had not yet begun a mandatory safety recertification process required 40 years after it was built, he said.

“It’s definitely not an easy decision,” Sorey said. “It’s just the right thing to do during these times. It’s uncertain what’s going to happen with the storm.”

The latest remains recovered from the rubble left behind by the 12-story Champlain Towers South in nearby Surfside left 126 people listed as still missing and feared dead. No survivors have been pulled alive from the ruins since the first few hours after the tower partially caved in on itself early on June 24.

The number of people on the missing list dropped by 17 from Thursday, Miami-Dade Mayor Daniella Levine Cava told reporters, saying that the totals were “fluid” and sometimes revised through work by investigators.

Levine Cava said she had signed a demolition order for a remaining section of the tower over worries that it was dangerously unstable halted search and rescue efforts at the scene for much of Thursday.

“It’s important to note that we’re still evaluating all possible impacts and determining the best timeline to actually begin the demolition,” she said.

The operation was scaled back on Friday to three of the nine grids mapped out across the debris field. Crews also sought to make progress before the expected arrival of Elsa, which strengthened into the first hurricane of the 2021 season on Friday as it churned in the Caribbean Sea.

Among the dead found in Surfside on Friday was the daughter of a firefighter, the third child fatality to be recovered so far. Miami Mayor Francis Suarez told the Miami Herald that the firefighter was at the recovery site at the time, though not digging through the rubble.

The man and his brother, also a firefighter, have kept a vigil at the site since last week, the Herald said. About 200 officers saluted as her body was carried away, according to the paper.

“Every victim we remove is very difficult,” said Miami-Dade County Fire Chief Alan Cominsky. “Last night was even more, when we were removing a fellow firefighter’s daughter. As firefighters, we do what we do – it’s kind of a calling. But it still takes a toll.”

Florida Governor Ron DeSantis wrote on Twitter that more than 400 members of the U.S. Army Reserve from Indiana, New Jersey, Ohio and Virginia had arrived in Surfside to assist in the effort.

Investigators have not determined what caused the 40-year-old condo complex to crumble abruptly into a heap in what may ultimately be one of the deadliest building collapses in U.S. history.

A 2018 engineering report prepared for the 40-year recertification process found structural deficiencies that are now the focus of inquiries that include a grand jury examination.

USA Today, citing a 2020 document obtained from a victim’s family member, reported that the firm noted “curious results” after testing the depth of a concrete slab below the pool. The document did not elaborate, the newspaper said.

As recently as April, a condo association president wrote to residents warning them that major concrete damage identified by the engineer around the base of the building had grown significantly worse.

Several lawsuits have already been filed on behalf of survivors and victims against the association’s board. In a statement on Friday, the board – some of whose members remain missing – said it would appoint an independent receiver to “oversee the legal and claims process.”