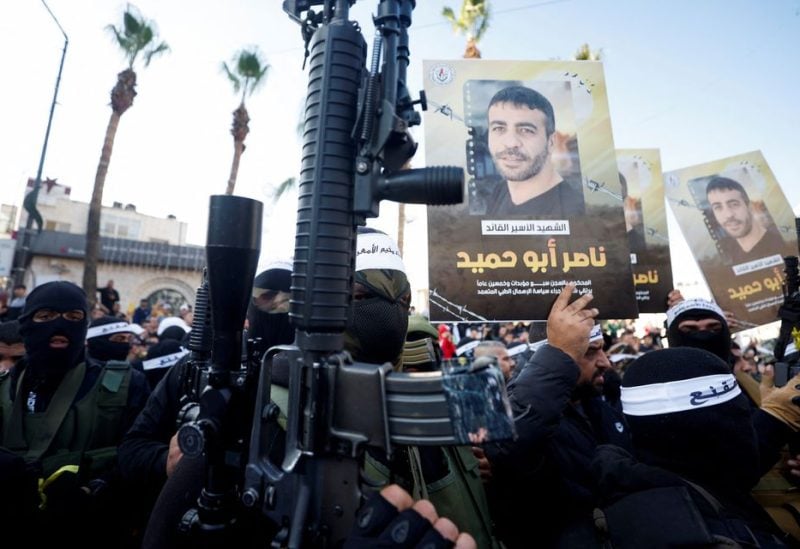 Palestinians including gunmen gather during a protest following the death of senior Palestinian militant Nasser Abu Hmaid who was jailed by Israel and died in an Israeli hospital where he has been moved to after his health conditions deteriorated, in Ramallah in the Israeli-occupied West Bank December 20, 2022. REUTERS/Mohamad Torokman

A senior Palestinian militant jailed for life by Israel and mentioned by Palestinian President Mahmoud Abbas in a speech to the United Nations died of cancer on Tuesday, according to authorities.

Nasser Abu Hmaid, a co-founder of the Al-Aqsa Martyrs Brigades, an armed wing of Abbas’ Fatah movement, was convicted of murdering seven Israelis and plotting other attacks. In Israel and the West, the Brigades are considered a terrorist organization.

He was serving multiple life sentences and had been in prison since 2002.

In Ramallah, in the Israeli-occupied West Bank, armed members of Abbas’s Fatah faction rallied in the streets, some firing rifles into the air before they announced the formation of a new armed group called “The Masked Lion”, a nom de guerre of Hmaid.

After Abu Hmaid’s health condition deteriorated, the Prisons Service moved him to a hospital outside the jail and let his family visit him briefly on Monday, in the presence of guards, his mother told Voice of Palestine radio.

“Thank God, I and his brothers were able to see him and pay him farewell,” she said, adding that she hoped his body would be released for burial.

In his speech to the U.N. General Assembly in September, Abbas said Palestinians were telling “the heroic prisoner Nasser Abu Hmaid and his companions that dawn is coming, and it is time for their chains to be broken”.

Ismail Haniyeh, the political chief of the rival Islamist Hamas group, mourned Hmaid’s death in a statement as “a crime that will not go unpunished.”