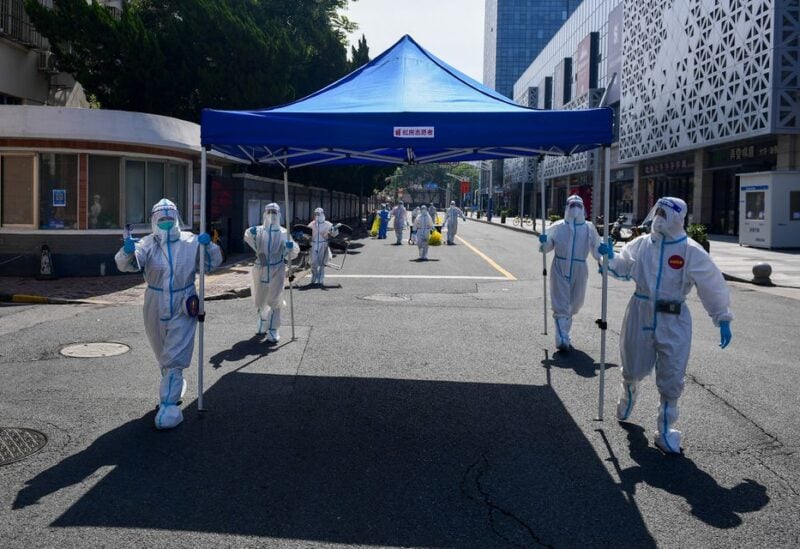 Workers in protective suits move equipment for a makeshift nucleic acid testing site to the next residential area after wrapping up the screening at a compound, amid the coronavirus disease (COVID-19) outbreak in Shanghai, China May 14, 2022. Picture taken May 14, 2022. cnsphoto via REUTERS

Shanghai announced preparations on Monday for a return to more normal living on June 1st, marking the end of a harsh COVID-19 shutdown that lasted more than six weeks and contributed to a severe slowdown in China’s economic activity.

In the clearest timeline yet, Deputy Mayor Zong Ming said Shanghai’s reopening would take place in stages, with movement restrictions primarily in place until May 21 to prevent a resurgence of illnesses, before reducing gradually.

“From June 1, to mid- and late June, as long as risks of a rebound in infections are controlled, we will fully implement epidemic prevention and control, normalize management, and fully restore normal production and life in the city,” she said.

The full lockdown of Shanghai and COVID curbs on hundreds of millions of consumers and workers in dozens of other cities have hurt retail sales, industrial production and employment, adding to fears the economy could shrink in the second quarter.

The severe restrictions, increasingly out of step with the rest of the world, which has been lifting COVID rules even as infections spread, are also sending shockwaves through global supply chains and international trade.

Data on Monday showed China’s industrial output fell 2.9% in April from a year earlier, down sharply from a 5.0% increase in March, while retail sales shrank 11.1% year-on-year, after falling 3.5% the month before.

Both were well below expectations.

Economic activity has probably been improving somewhat in May, analysts say, and the government and central bank are expected to deploy more stimulus measures to speed things up.

But the strength of the rebound is uncertain due to China’s uncompromising “zero COVID” policy of eradicating all outbreaks at all costs.

“China’s economy could see a more meaningful recovery in the second half, barring a Shanghai-like lockdown in another major city,” said Tommy Wu, lead China economist at Oxford Economics.

“The risks to the outlook are tilted to the downside, as the effectiveness of policy stimulus will largely depend on the scale of future COVID outbreaks and lockdowns.”

Beijing, which has been finding dozens of new cases almost every day since April 22, offers a strong indication of how difficult it is to tackle the highly transmissible Omicron variant.

The capital has not enforced a city-wide lockdown but has been tightening curbs to the point road traffic levels in Beijing slid last week to levels comparable to Shanghai’s, according to GPS data tracked by Chinese internet giant Baidu.

On Sunday, Beijing extended guidance to work from home in four districts. It had already banned dine-in services at restaurants and curtailed public transport, among other measures.

In Shanghai, the deputy mayor said the city would begin to re-open supermarkets, convenience stores and pharmacies from Monday, but that many movement restrictions had to remain in place until at least May 21.

It not clear how many businesses have reopened.

From Monday, China’s railway operator will gradually increase the number of trains arriving and departing from the city, Zong said. Airlines will also increase domestic flights.

From May 22, bus and rail transit will also gradually resume operations, but people will have to show a negative COVID test not older than 48 hours to take public transport.

During the lockdown, many Shanghai residents have been disappointed time and again by shifting schedules for the lifting of restrictions.

Many residential compounds got notices last week that they would be in “silent mode” for three days, which typically means not being able to leave the house and, in some cases, no deliveries. Another notice then said the silent period would be extended to May 20.

“Please don’t be lying to us this time” one member of the public said on the Weibo social media platform, adding a crying emoji.

Shanghai reported fewer than 1,000 new cases for May 15, all inside areas under the strictest controls.

In relatively freer areas, the ones monitored to gauge progress in eradicating the outbreak, no new cases were found for a second day in a row.

A third day would usually mean “zero COVID” status has been achieved and restrictions can begin to ease. Fifteen of the city’s 16 districts had reached “zero COVID”.