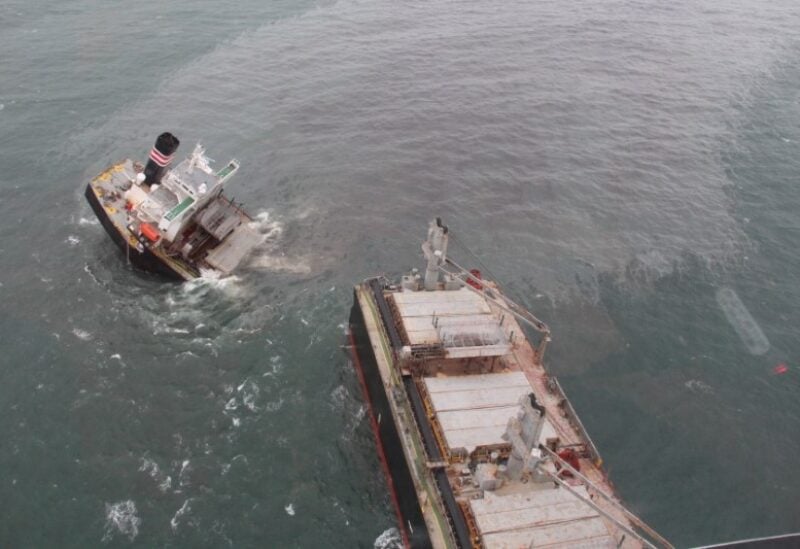 A view of the Panamanian-registered ship 'Crimson Polaris' after it ran aground in Hachinohe harbour in Hachinohe, northern Japan, August 12, 2021, in this handout photo taken and released by 2nd Regional Coast Guard Headquarters. Courtesy 2nd Regional Coast Guard Headquarters - Japan Coast Guard/Handout via REUTERS ATTENTION EDITORS - THIS PICTURE WAS PROVIDED BY A THIRD PARTY. MANDATORY CREDIT.

The Japan Coast Guard said a Panamanian-registered ship ran aground and was leaking oil in a northern Japanese harbor, but there were no injuries among the 21 crew members and the oil leak was being contained with no signs it had reached shore.

The 39,910-tonne vessel, the “Crimson Polaris,” was carrying wood chips when it ran aground on Wednesday morning in Hachinohe harbour. It managed to free itself, but due to poor weather was unable to move far and ended up anchoring about 4 km (2.4 miles)out from the port.

A crack developed in the hull and oil began leaking, with a slick 5.1 km long by 1 km wide visible by Thursday morning, the Coast Guard said, adding that containment measures were being taken by patrol boats.