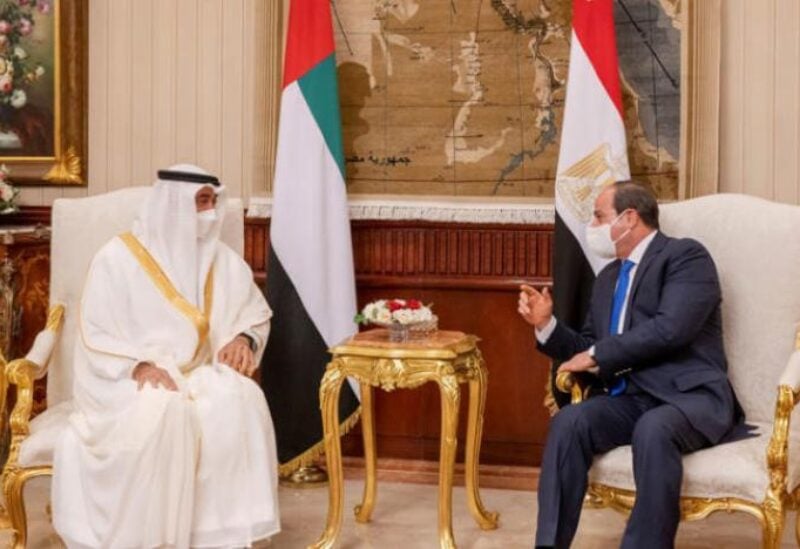 Bin Zayed was received by Egyptian President Abdel Fattah el-Sisi, during which they discussed bilateral relations and means of bolstering them in various fields.

They also tackled joint action in a way that achieves mutual interests, in addition to the latest developments in regional and international issues of common interest, state news agency WAM reported.

During the meeting, which was attended by Sheikh Mansour bin Zayed Al Nahyan, Deputy Prime Minister and Minister of Presidential Affairs, both officials touched on the developments of the coronavirus pandemic in both countries and the world and the efforts made to limit its repercussions at various levels.

Bin Nahyan stressed UAE’s keenness to coordinate and discuss with Egypt the regional issues and crises and means of addressing them.

Sisi, for his part, welcomed Bin Zayed’s visit, noting that it gives a strong impetus to the bilateral fraternal and strategic ties and joint action that would serve both countries’ interests and attain their aspirations for progress, development and prosperity.

He reiterated Cairo’s firm stance that adheres to the Gulf security and rejects any practices that seek to destabilize it.

They agreed to continue exerting joint efforts to reach political settlements to the existing crises in several regional countries, restore their national institutions and preserve their resources.

Bin Zayed and Sisi also decided to create a comprehensive vision to develop joint Arab action, while ensuring it enhances Arab capabilities to face regional challenges and growing threats to the regional security.

“They agreed to maximize Egyptian-Emirati cooperation and coordination as a basic pillar to protect Arab national security and confront foreign interventions in the sovereign affairs of the regional countries that led to fueling tensions, conflicts and terrorist and extremist activities,” Rady stated.