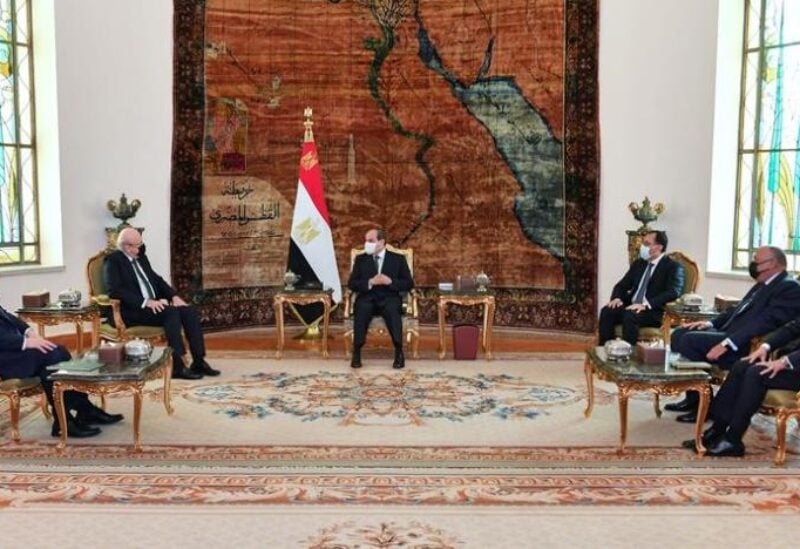 Israel’s Foreign Minister Yair Lapid, on his first diplomatic trip to Cairo, met with Egyptian President Abdel Fattah al-Sisi on Thursday who stressed Egypt’s ongoing efforts to achieve a comprehensive and just peace based on the “two-state solution.”

Sisi stressed his country’s continued efforts to achieve comprehensive and just peace in the Middle East region based on the “two-state solution and the UN resolutions and international legitimacy.”

He pointed to Cairo’s efforts to reconstruct the Gaza Strip and prevent the outbreak of tension between the Palestinians and Israeli sides.

Shoukry, for his part, underlined Egypt’s firm stance to support peace and stability efforts in the region and revive negotiations between the Israeli and Palestinian sides as soon as possible.

These efforts are aimed at attaining a comprehensive and just settlement of the Palestinian cause based on the two-state solution and relevant international resolutions to achieve the aspirations of the peoples of the region for peace, security and prosperity, a foreign ministry statement read.

They further tackled the most prominent issues of common concern at the regional and international levels, the statement noted.

Cairo will continue its efforts and contacts with all relevant parties to revive the aspired political path, Shoukry stressed.

He urged Israel to refrain from carrying out unilateral measures, including those related to settlement in the Palestinian territories since they “represent an obstacle to peace efforts and the ability to achieve a two-state solution.”

Lapid handed over to Shoukry 95 relics that had been smuggled into the country or found for sale in Jerusalem.

He said Israel returned the items “at the request of Egyptian authorities and as a gesture of goodwill.”