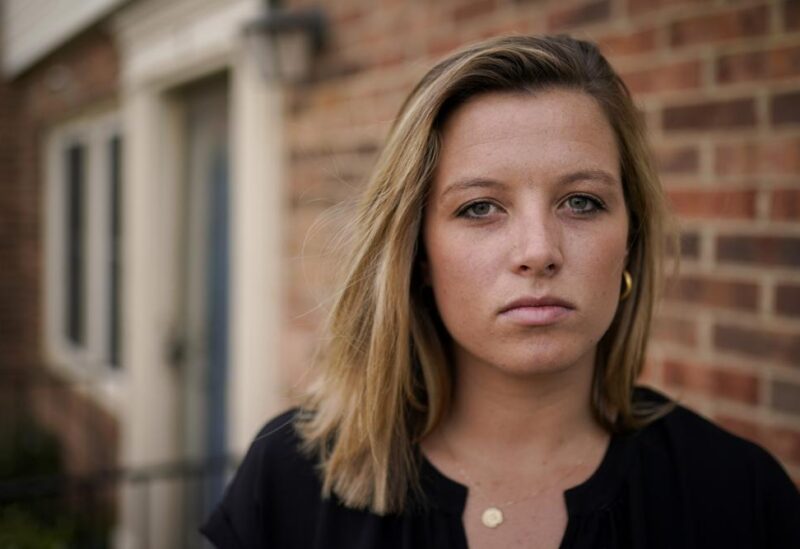 Shannon Keeler poses for a portrait in the United States on Wednesday, April 7, 2021. A series of online messages from a long-ago schoolmate has Keeler, a Gettysburg College graduate, trying again to get authorities to make an arrest in her 2013 sexual assault. (AP Photo)

MOORESTOWN, New Jersey: Shannon Keeler was enjoying a weekend getaway with her boyfriend last year when she checked her Facebook messages for the first time in ages. A name popped up that stopped her cold.

“So I raped you,” the person said in a burst of unread messages sent six months earlier.

“I’ll never do it to anyone ever again.”

“I need to hear your voice.”

The messages rocketed Keeler back to the life-shattering night in December 2013 when an upperclassman at Gettysburg College stalked her at a party, snuck into her dorm and barged into her room while she pleaded with him and texted friends for help. It was the final night of her first semester of college.

Eight years later, she still hopes to persuade authorities in Pennsylvania to make an arrest, armed now with perhaps her strongest piece of evidence: his alleged confession, sent via social media.

But is it enough?

Before and after the attack, Keeler followed the protocols designed to prevent campus sex assaults or address them when they happen. She had a male friend walk her home from the party. She reported the rape that day, met with police and endured a painful and intrusive rape exam. And she pushed for charges. Yet, at every turn, the justice system failed her, just like it fails most college rape victims.

For all the focus on sexual violence in the #MeToo era, and on student protections under Title IX, very few campus rapes are ever prosecuted, according to victim advocates and the limited crime data available. Only one in five college sex assault victims report to police. And when they do, prosecutors often hesitate to take cases where victims had been drinking or knew the accused.

“It has bothered me over the years that I was never able to do anything,” said Keeler, now 26. “If you’re not going to help me, who are you going to help? Because I do have evidence.”

As a 5-foot-11 goalie for one of the best high school lacrosse teams in the country, Keeler had plenty of options for college. By senior year, she was the starter, and capped her career at Moorestown High School in New Jersey with a state title. She had long dreamed of playing Division I.

But Gettysburg Coach Carol Cantele sold her on the rewards of playing for a smaller Division III program. She could study abroad. Join a sorority. Have a life.

She left for Gettysburg in August.

A snowstorm had pushed back her last final, leaving the 18-year-old on campus an extra day. Most students had cleared out.

Keeler sat for the Spanish exam that Saturday. She and a girlfriend took playful pictures in the snow that night, and had a few drinks and got pizza. She’d drive her little Nissan Versa home the next day.

“You know, I didn’t have a worry in the world,” Keeler said.

She met up with friends at a fraternity house, where she had fun drinking and dancing. An upperclassman, who did not belong to the frat, started bothering a sophomore from Connecticut.

“I met this guy. And we started dancing and kissing,” said the woman, Katayoun Amir-Aslani. “But then he grabbed my chest and my crotch and told me he wanted to take me away. And so I freaked out and told him I needed to go to the bathroom.”

She spotted Keeler in there and asked for help, though they’d never met. The tall, first-year athlete agreed to help fend him off.

Later in the night, the same guy focused on Keeler, “getting gross” with her on the dance floor.

“He wasn’t getting the hint,” she said. “It was getting creepy. My friend said, ’Do you want me to walk you home?”

The dorm was just across the street, but the male friend accompanied her. The creep followed them — offering $20 for the friend to leave them alone, disappearing when he was rebuffed, and finding his way to Keeler’s room after she went to bed.

Keeler heard a knock and presumed it was a friend. To her dread, it was him.

“I opened it and I texted my friends that he was here and I needed help. And he raped me,” Keeler said. “As soon as he did, he started crying after.”

At that point, she did not even know his name.

Four friends came running from the frat house. It was nearly 3 a.m., and the freshman dorm was locked. They had to wait for Keeler to come down from the third floor and let them in.

“I will never forget the look on her face, when she opened the door for us. It was heartbreaking,” said Amir-Aslani, who was among them.

Keeler went back to the frat with them and tried to get some sleep.

At 10 a.m., back at Patrick Hall, she ran into a resident assistant, and he brought her to campus security. They asked Gettysburg police to respond, but an officer said Keeler had to come to them, records show. The RA took her to the police station, and she gave a statement. Then her coach came and took her to the hospital.

Cantele, as she drove, thought: “How could this have happened to one of ‘my girls’? How could I have educated them better to watch out for each other, and for themselves?”

And: “Why do we even have to think like that?”

Keeler’s parents were in church when they got the call. Monica Keeler, a nurse, stepped out into the cold to take it, on to a quaint Main Street in their Philadelphia suburb, dotted with century-old churches and small stores.

He found Cantele at the hospital. Already, his daughter had been given medications to prevent sexually transmitted diseases, infections, pregnancy and nausea, and been interviewed again, photographed and swabbed.

They drove home together in the Versa for Christmas.

Within a week or so, Monica and Shannon Keeler returned to Gettysburg to meet with police. It did not go well.

“The impression was, there are so many of these (campus) incidents, how could we ever investigate all this?” the mother recalled.

The suspect, identified by others at the party, left Gettysburg but denied any wrongdoing in an email to school officials, according to records that Keeler obtained. His withdrawal ended the school’s Title IX investigation, she said.

The Associated Press — which tried to reach the 28-year-old man through phone numbers and emails linked to him and his parents, and through social media — is not identifying him because he has not been charged. None of the AP’s messages were returned. He appeared to finish college at another school, based on his online profile.

In early January, Keeler got a terse letter from Gettysburg’s police chief saying she had 20 days to decide whether to pursue charges. The statute of limitations for rape in Pennsylvania is 12 years.

Her family, following her lead, went all in. They called school officials, detectives, prosecutors and the victim’s advocate. They sent emails seeking updates. Keeler told police how to reach Amir-Aslani and the other witnesses. Eighteen months and two lacrosse seasons went by.

Finally, before Keeler left for Spain her junior year, Adams County District Attorney Scott Wagner agreed to meet with them at a highway rest stop.

Keeler recalls him saying it would be hard to prove what went on in her room that night. And that it was difficult to bring cases when alcohol is involved. And that the suspect was living out-of-state — seemingly, out of their reach.

In late December 2015, days after she returned from Seville, Keeler learned he would not be filing charges. The two-year window to sue her attacker had closed.

“So, basically, you’re telling me that anybody that rapes a girl in Adams County gets a pass?” Keeler thought.

Wagner, now a county judge, declined to speak with The Associated Press.

His successor, District Attorney Brian Sinnett, would not discuss the specifics of Keeler’s case, but said he can’t bring charges unless a case meets the high bar needed for conviction.

According to his records, his office filed 10 rape charges in the county from 2013 to 2019 involving adult victims, along with seven counts of another felony, involuntary deviate sexual intercourse. (Most of their sex crimes cases involve children or child pornography, he said.)

Yet Gettysburg College alone received 95 rape complaints during that period, according to the crime data that schools must report each year.

A well-regarded school of about 2,500 students, Gettysburg is far from alone in reporting a troubling number of campus sex assaults under the 1990 Clery Act. School officials declined to comment for this story, except to note that Clery data captures all alleged sexual assaults reported to them, some filed anonymously and never investigated.

According to Sinnett, few of those reports reach his office. And not all that do can be prosecuted.

“You have to look at what evidence do you have: can it be corroborated, whether it fits in with the statute of limitations, what is the likelihood of success at trial? All of those types of things,” Sinnett said. “I don’t know an ethical prosecutor who would say, ’I think I might have probable cause — let’s just throw it up and see what a jury does.’” – Associated Press