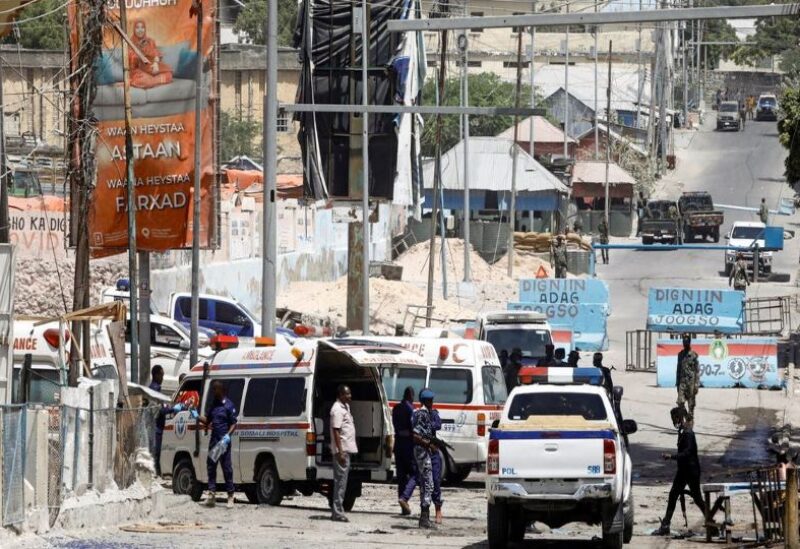 Somali security forces secure the road leading to the scene of an explosion at a checkpoint near the Presidential palace in Mogadishu, Somalia February 10, 2022. (Reuters)

Somali state TV announced that security forces shot dead two armed attackers who tried to burst into an army base near the international airport in the capital Mogadishu on Wednesday, state television said.
Earlier in the day, it said  that security forces were battling a “terrorist incident” at the camp’s gates with a witness saying gunmen had forced their way in and begun shooting.
State radio reported later that the two attackers had been stopped at the base gates.

“Security Forces have shot dead two armed terrorists who attempted to force their way into the army base near #Mogadishu’s Adan Abdulle International Airport on Wednesday and police will give details shortly,” state TV said on its Twitter account.
Al Qaeda-linked Al-Shabab said it was behind the attack. The Islamist militant group’s Radio Andalus said in a broadcast that its fighters had attacked the Halane base and were still shooting.
The camp hosts African Union (AMISOM) peacekeeping troops, UN and other international organizations and is near the airport.
Mahad Hirsi, a witness at the compound, told Reuters that he saw the attackers force their way through the gate and start shooting, and that “a number of injured AMISOM soldiers (were) lying on the ground.”
His account could not immediately be independently confirmed. Spokespeople for AMISOM and the United Nations’ Somalia office did not immediately respond to Reuters calls and messages requesting comment.
Due to the gunfire near the airport flight traffic had been halted, a travel agent said.
Al Shabab aims to topple the central government in the Horn of Africa country and impose its own severe interpretation of Islamic law.