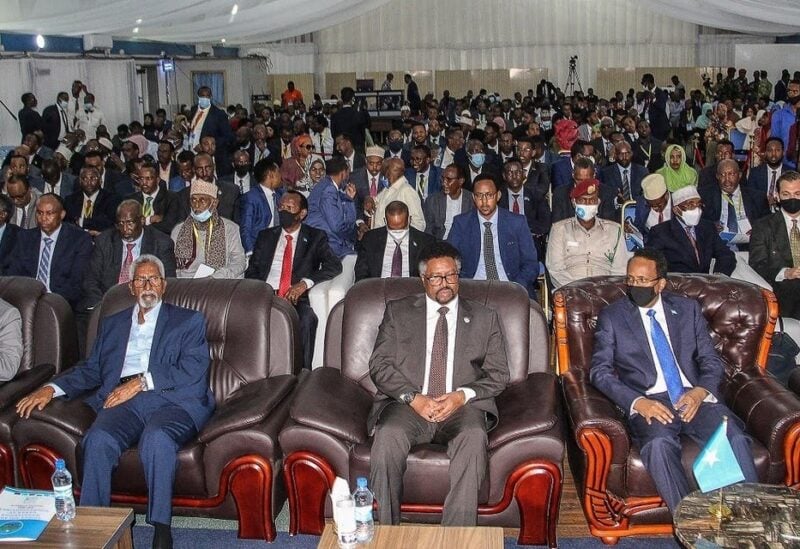 Somalia’s President Mohamed Abdullahi Mohamed (R) attends a closing ceremony after reaching an agreement with state leaders over the terms of a new election, at the National Consultative Council on Elections in Mogadishu, Somalia, on May 27, 2021. (AFP)

Somalia has postponed elections that were due to start on Sunday after months of delays in the deeply unstable Horn of Africa country, officials told AFP.

Indirect parliamentary and presidential polls were due to open on July 25 with four days of voting for the upper house by state delegates. The election cycle was due to end with a presidential poll on October 10.

“Even though the plan was the upper house election to start around the various states today, there is a delay, the election may not take place as planned,” a member of the electoral commission told AFP on condition of anonymity.

The delay was due to the fact that federal regions were neither able to submit candidates’ lists in time, nor to form local committees to cast the ballots, the source added.

A spokesman for the federal government, Mohamed Ibrahim Moalimu, told AFP that the elections were “postponed,” without providing details.

Last week, the country’s Al-Shabaab militants warned politicians against taking part in the elections, which were due to kick off after months of deadlock and delays.

The threat, in an audio message purportedly recorded by Al-Shabaab leader Ahmed Umar Abu Ubaidah, underscores the security challenges facing the election process in the country.

Somalia’s political leaders finally agreed last month on a voting timetable after months of stalemate that turned violent at times.

President Mohamed Abdullahi Mohamed and the leaders of Somalia’s five states had been unable to agree on the terms of a vote before his term lapsed in February, triggering an unprecedented constitutional crisis.