Some Russians rush for the border after mobilisation order 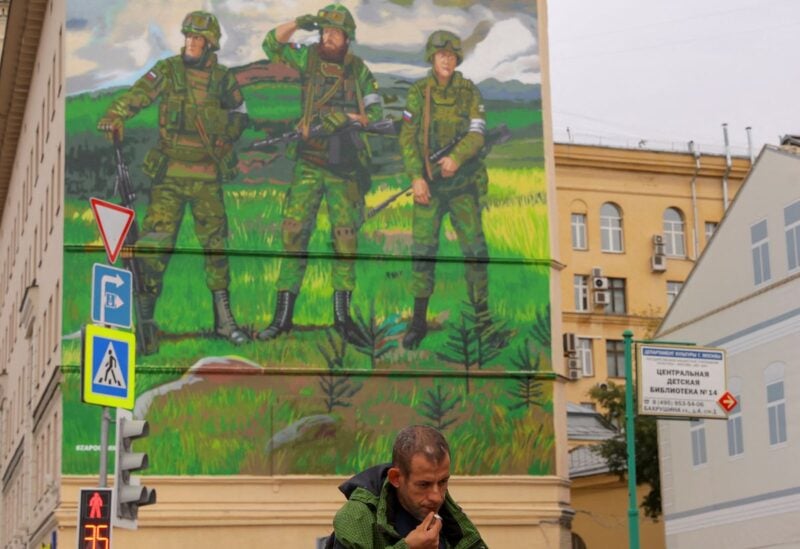 A man smokes while walking past a mural, which was painted on a multi-storey building in support of the Russian army, in Moscow, Russia September 21, 2022. REUTERS/Evgenia Novozhenina

Several Russian men hurried for the exits as President Vladimir Putin ordered a partial mobilization, with traffic at border crossings with Finland and Georgia increasing and jet tickets from Moscow skyrocketing.

Putin ordered Russia’s first mobilization since World War II on Wednesday and endorsed a plan to seize large swaths of Ukraine, telling the West that he wasn’t joking when he claimed he’d be willing to use nuclear weapons to defend Russia.

Prices for air tickets out of Moscow soared above $5,000 for one-way tickets to the nearest foreign locations, with most air tickets sold out completely for coming days.

Social media groups popped up with advice on how to get out of Russia while one news site in Russian gave a list of “where to run away right now from Russia.” There were long tailbacks at border crossings with Georgia.

“War is horrible,” Sergei, a Russian man who declined to give his surname, told Reuters as he arrived in Belgrade, the Serbian capital. “It’s okay to be afraid of war and of death and such things.”

One Russian man who gave his name only as Alex told Reuters in Istanbul that he had left Russia partly due to the mobilisation.

“The partial mobilisation is one of the reasons why I am here,” he said. “A very poor step it seems to be, and it can lead to lots of problems to lots of Russians.”

He said he felt that not many Russians would want to be sent to fight.

Kremlin spokesman Dmitry Peskov said on Thursday that reports of an exodus of draft-age men were exaggerated. Asked about reports that men detained at anti-war protests were being given draft papers, Peskov said it was not against the law.

Russian state-owned pollsters say that more than 70% of Russians support what the Kremlin calls the “special military operation”, though polling leaked in July showed an even split between those who wanted to fighting to stop or continue.

The war in Ukraine has killed tens of thousands, unleashed an inflationary wave through the global economy and triggered the worst confrontation with the West since the 1962 Cuban Missile Crisis, when many feared nuclear war imminent.

A tourism industry source told Reuters that there was desperation as people sought to find air tickets out of Russia.

“This is panic demand from people who are afraid they won’t be able to leave the country later – people are buying tickets not caring where they fly to,” the source said.

“The number clearly has picked up,” the Finnish border guard’s head of international affairs, Matti Pitkaniitty, told Reuters, adding that the situation was under control and border guards were ready at nine checkpoints.

In the far eastern region of Yakutia, a military commissar ordered a call for mobilisation.