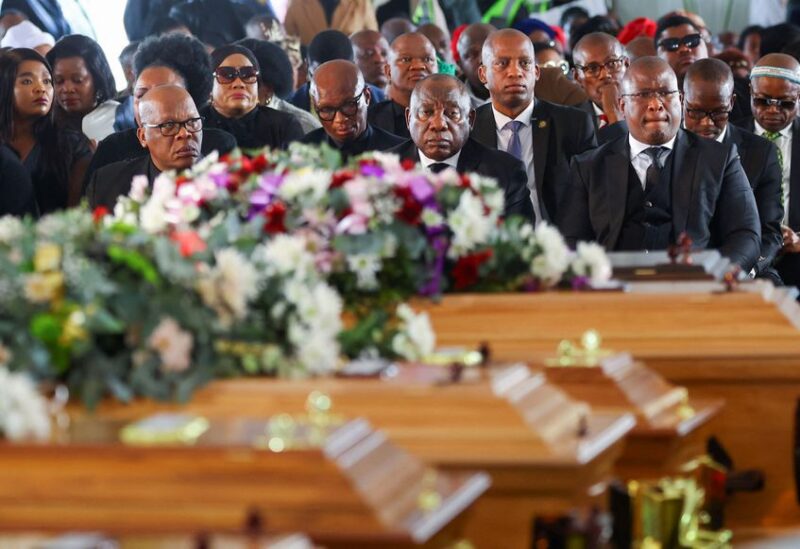 South African President Cyril Ramaphosa looks on as he joins mourners gathered in the coastal city of East London to grieve the still-mysterious deaths of 21 teenagers in a poorly ventilated local tavern, in East London, in the Eastern Cape province, South Africa, July 6, 2022. REUTERS/Siphiwe Sibeko

South African mourners gathered in East London, a coastal city, on Wednesday to express their sorrow over the still mysterious deaths of 21 youths that occurred at a local pub ten days earlier.

They performed mournful gospel songs while dressed in black in front of the coffins of 19 fatalities, the youngest of which was Thembinkosi Silwane, a 13-year-old girl.

The funeral home reported that all were empty because police were still looking into the fatalities; the two survivors were buried separately by their families.

“Our hearts are broken. There are parents who will not get to hug or kiss their son or daughter again … They each had beautiful dreams. They each had a bright future ahead of them,” President Cyril Ramaphosa said in a speech at the funeral.

“This tragedy has affected all of us as a nation.”

The incident in a popular nightspot in Scenery Park township, outside the city of East London, at the end of last month, provoked an outpouring of sorrow and soul-searching in a nation accustomed to injuries from a heavy-drinking culture.

It has also reignited a debate about South Africa’s stark inequalities, with many, including the billionaire President Ramaphosa himself, pointing out lack of viable sports grounds, youth centres or libraries in townships such as Scenery park.

“We want the answers,” Silwane’s mother Thobeka told Reuters, wearing a black head-wrap and wiping away tears, who said she also blamed herself for allowing her child out. “I don’t know what children of her age were doing in that kind of tavern.”

Forensic teams investigating how the youths died have yet to reveal their conclusions. The most likely cause appears to be some kind of chemical or gas leak on the ground floor of the venue, which was packed and had little ventilation. Another theory authorities have been investigating is that they were poisoned by something they ate, drank or smoked.

“We will do everything in our power to ensure that a tragedy of this kind does not repeat itself,” Eastern Cape Premiere Oscar Mabuyane said.

Some of the survivors admitted to hospital complained of chest pains. Others spoke of trying to leave in panic as people dropped dead around them, but being unable to find an exit.

“Focus not on the shame and embarrassment … but on the grief at the loss,” the preacher, Bathandwa Kwatsha, urged during a prayer for the crying families. “God will comfort you,” she said in the local Xhosa language.