South Korea must respond to N.Korea despite its nuclear arms 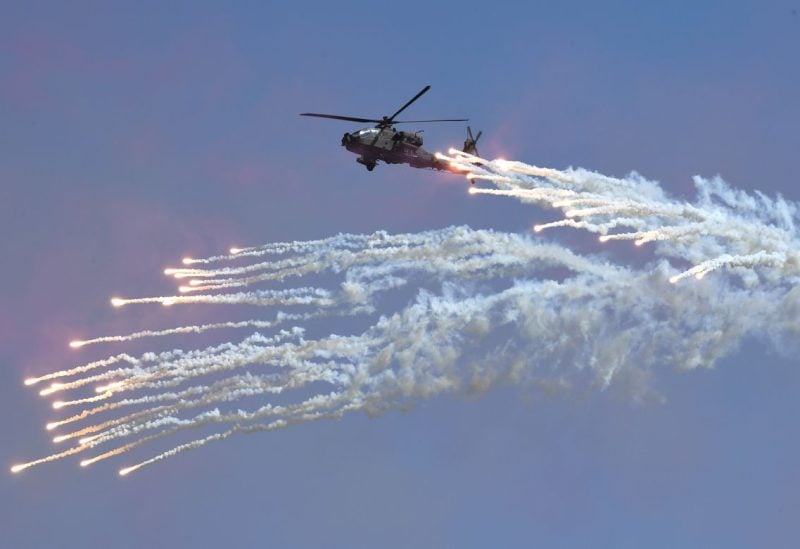 A South Korean Navy Lynx helicopter fires flares during a commemoration ceremony marking South Korea's Armed Forces Day, which will fall on October 1, at the Second Fleet Command of Navy in Pyeongtaek on September 28, 2017. REUTERS/Jung Yeon-Je/Pool

Five North Korean drones crossed into South Korea on Monday, prompting the South Korean military to scramble fighter jets and attack helicopters in an attempt to shoot them down, in the first such incursion since 2017.

“We must punish and retaliate against any provocation by North Korea. That is the most powerful means to deter provocations,” Yoon said in a meeting with his aides, according to his press secretary Kim Eun-hye.

“We must not fear or hesitate because North Korea has nuclear weapons,” he said.

Monday’s intrusion triggered criticism in South Korea of its air defences. Yoon chided the military, in particular its failure to bring down the drones while they flew over South Korea for hours.

Defence Minister Lee Jong-sup told parliament on Wednesday that Yoon had ordered him to send drones into North Korea in response to any incursion “even if that means risking escalation”.

South Korea’s military has apologised for its response and said it could not shoot down the drones because they were too small.

Relations between North Korea and U.S. ally South Korea have been testy for decades but have grown even more tense since Yoon’s conservative government took over in May promising a tougher line with the northern rival.

North Korea has also been pressing on with the development of its weapons with numerous missile tests this year amid speculation it could test a nuclear weapon for a seventh time.

Earlier on Wednesday, South Korea’s defence ministry announced plans to spend 560 billion won ($441.26 million) over the next five years to improve its defences against drones, including the development of an airborne laser weapon and a signal jammer.

South Korea also aims to procure more stealth jets and ballistic missile submarines and to accelerate the development of systems to intercept rockets, the ministry said.

“We will strengthen our … retaliation capability to be able to destroy key facilities anywhere in North Korea in case of its nuclear attack or use of weapons of mass destruction,” the ministry said in a statement.

In total, the ministry aims to spend 331.4 trillion won ($261 billion) on defence over the next five years, with an average annual increase of 6.8%. This year’s budget stood at 54.6 trillion won.