South Korea to negotiate with striking truckers again, but gap seen too big 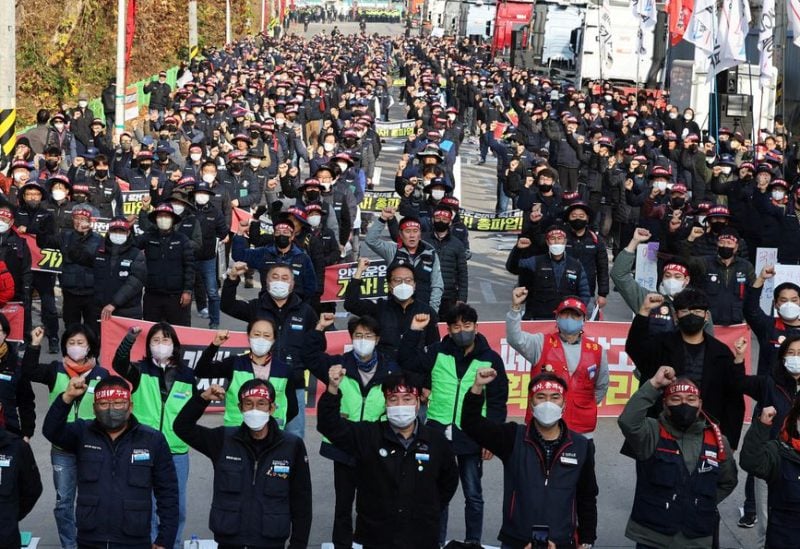 Unionized truckers shout slogans during their rally as they kick off their strike in front of transport hub Uiwang, south of Seoul, South Korea November 24, 2022. Yonhap/via REUTERS

South Korea will meet with striking truckers for more talks on Wednesday, as concerns grow about fuel shortages, higher grocery prices, and economic damage, and the government invoked a law requiring 2,500 cement industry drivers to return to work.

According to union officials, the chasm between the two sides is too wide to bridge. Approximately 25,000 union drivers are on strike over minimum wage rules.

It is the second strike in less than six months and is causing daily losses of an estimated 300 billion won ($224 million), disrupting industrial activity in Asia’s fourth-largest economy, which is set to slump next year.

As of Tuesday, 21 petrol stations had run dry, the industry ministry said. Petrol stations nationwide had an average of about eight days of gasoline supply as they secured stock before the strike, but stations with high turnover in the Seoul metropolitan area are seeing shortages.

Out of 985 construction sites nationwide operated by 46 construction companies that submitted reports on Tuesday, work at 59%, or 577 sites, had been suspended because of a lack of supplies, the transport ministry said.

President Yoon Suk-yeol on Tuesday called the drivers’ demands “unreasonable” and said the government would take “every possible measure” to end the strike.

Union leaders were angered by the government “start work” order requiring drivers to get back on the road, saying that it was “anti-constitutional” and that they would take legal action against the move.

If cement transport workers do not comply to the start-work order, the government can suspend their transport licenses for 30 days, then revoke them.

The transport ministry and union are expected to meet at 2 p.m. local time (0500 GMT) in their second round of negotiations since the strike began last week.

Some 7,000 people rallied for the strike on Tuesday according to the transport ministry, saying the government’s hard-line stance showed no real intention for dialogue.

The government has repeatedly expressed unwillingness to expand a minimum pay system for truckers beyond a further three years, while the union says it should be permanent and wider in scope.