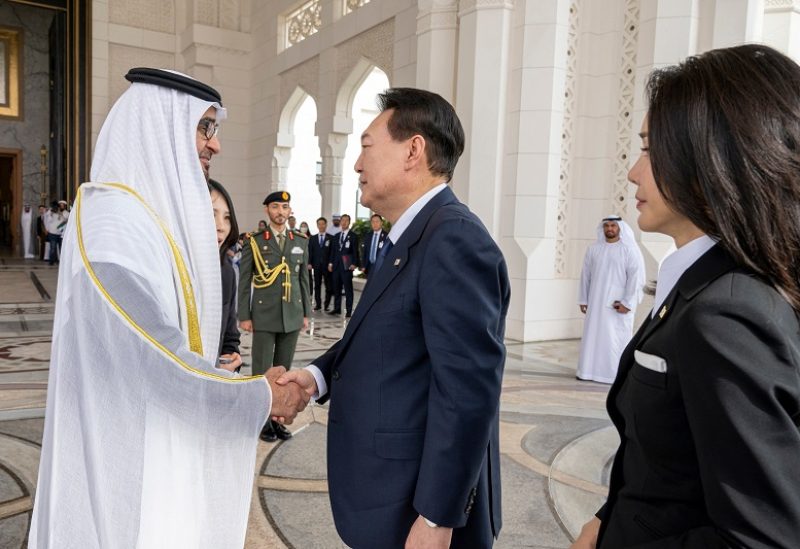 President Yoon Suk Yeol was greeted by an honour guard, while visiting the United Arab Emirates on Sunday to increase South Korea’s military sales.
Yoon’s visit comes when South Korea engages in multibillion-dollar commercial transactions and stationing special forces soldiers to guard the UAE. It is a plan that garnered criticism under his liberal predecessor.

The conservative leader, however, seems to seek to strengthen such military ties despite concerns with neighbouring Iran, which have already resulted in Tehran seizing a South Korean oil tanker in 2021.
Yoon arrived at the Qasr Al Watan mansion in Abu Dhabi on Sunday. Sheikh Mohammed bin Zayed Al Nahyan, who assumed power in May after years as the nation’s de facto leader, welcomed him.

Yoon and his wife Kim Keon Hee were received by an honour guard of Emiratis in traditional garb. They whirled replica Lee-Enfield weapons among warriors riding horses and camels. A military band played the Emirati and South Korean national anthems inside.

Even though the energy-starved South Korean depends on the Emirates for less than 10% of its crude oil needs, Seoul has made several agreements with this country of seven sheikhdoms that have a strong connection to Abu Dhabi and go well beyond oil. Cars, minerals, and other items worth billions of dollars are traded between South Korea and the UAE.
Officials stated before Yoon’s trip that the goal of the visit was to strengthen the existing connections between the two nations.

Already, in 2022, South Korea and the UAE agreed to a $3.5 billion sale of the M-SAM, an advanced air defence system that can intercept missiles as low as 40 kilometres in the air (25 miles).

Officials in the Emirati have grown more worried about safeguarding their airspace, as a result of Houthi rebels in Yemen, who are supported by Iran, being the focus of long-range drone assaults.

The Emiratis have been reducing their reliance on American military assistance ever since the chaotic American withdrawal from Afghanistan, even though American forces fired Patriot missiles for the first time in combat since the 2003 invasion of Iraq to defend Abu Dhabi during those attacks.