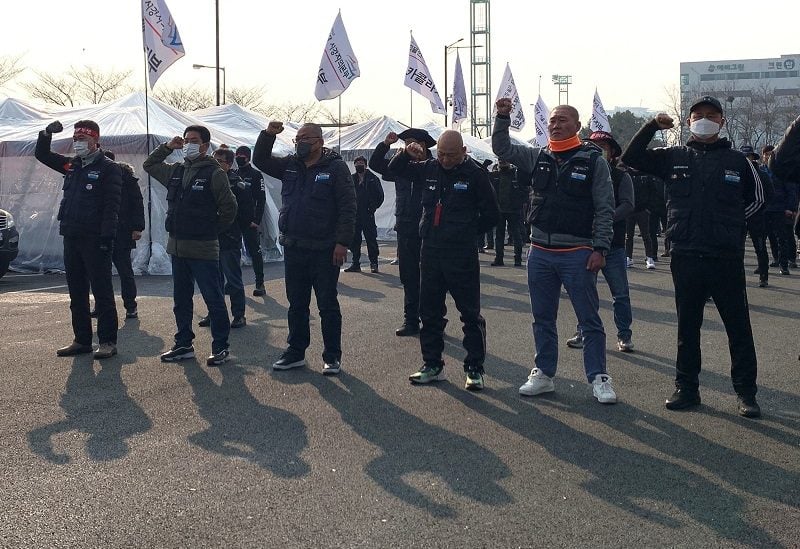 Truckers chant slogans after voting whether to end their strike at a terminal of an ICD (Inland Container Depot) in Uiwang, near Seoul, South Korea December 9, 2022. REUTERS/Minwoo Park

After a majority of union members voted to return to work seeing little possibility of achieving their aims of securing financial protections amid rises in fuel prices, thousands of South Korean truck drivers ended their strike on Friday

The vote to end the 16-day strike came a day after Seoul ramped up its hardline approach against organized labor by expanding back-to-work orders for up to 10,000 drivers.

The Cargo Truckers Solidarity union, with its 26,000 members, had been calling on the government to expand a system of minimum pay for truck drivers as well but faced opposition from a well-prepared industrial sector and defiance from conservative President Yoon Suk-yeol.

The union wanted to expand a system of minimum freight rates that currently only covers the movement of shipping containers and cement to include other cargo such as oil, chemical tankers, steel, oil, automobile carriers and package delivery trucks.

They also wanted to make the system permanent as it is set to end at the end of the year. The government had agreed to extend it by three years, but not to expand the system to other cargos.

It followed an eight-day strike in the summer that ended with both the union and the government claiming victory.
However, on Friday 62% of voting union members agreed to end the strike, although with a low turnout of only around 3,600 members participating.

The union said it would continue its campaign to demand minimum fares for drivers facing rising costs.

Businesses prepared to weather the storm ahead of the second bout of industrial action which limited the effectiveness of the strike to domestic industries.

Petrol stations and some businesses stocked up with goods beforehand while also paying higher rates to employ strikebreakers.

The government also pulled out all the stops to avoid making any concessions. President Yoon invoked unprecedented powers to force some truckers back to work by using a law introduced in 2004 but not used until now.

Yoon also compared the striking workers to the threat posed by the nuclear program of Seoul’s northern neighbor.

The president has seen his approval rating increase with a recent poll showing a jump of over 9 percentage points to 41.5%.

“Yoon’s tough stance won the hearts of some elderly conservatives that have long been antagonistic about labor unions,” Kim Mi-hyun, the head pollster at R&Search, told Reuters.