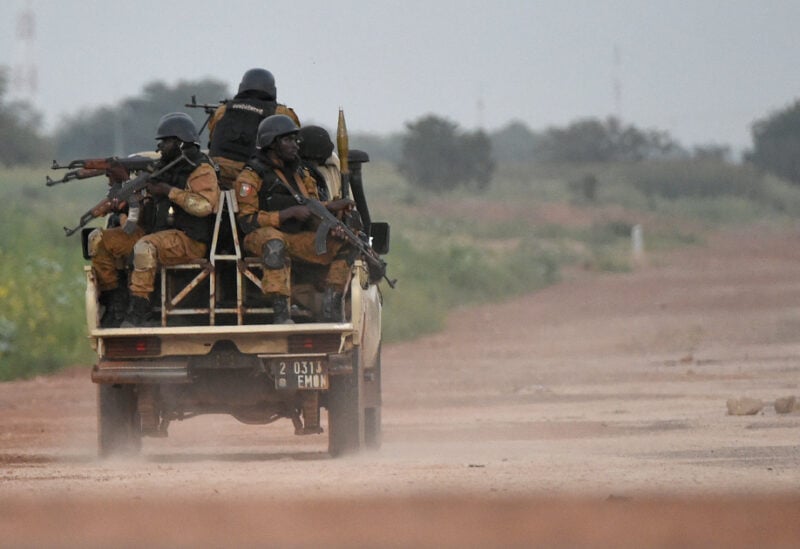 (FILES) In this file photograph taken on September 29, 2015, Burkinabe gendarmes patrol near the Presidential Security Regiment (RSP) military barracks in Ouagadougou. - Burkina Faso security forces launched a massive manhunt on April 27, 2021, after the abduction of three Westerners along with a Burkinabe national, as a top security source warned at least two of them may have been killed. The group was abducted after an attack on an anti-poaching patrol in the landlocked West African nation, security and diplomatic sources said. A Spanish foreign ministry source told AFP in Madrid that two Spanish nationals were missing. A security source in Burkina Faso said an Irish man was also among the group. (Photo by Sia KAMBOU / AFP)

Two Spanish journalists were killed after an armed ambush on an anti-poaching patrol in Burkina Faso, Spain’s prime minister said on Tuesday.

The Burkina Faso government had confirmed four people including three foreigners were missing following the ambush, but said photos of the bodies circulating on social networks had not been formally identified as being theirs.

However, Spain’s prime minister confirmed the deaths of the two journalists who had been filming a documentary. “The worst of news is confirmed,” Pedro Sanchez said on Twitter.

Ireland’s foreign ministry said late on Monday it was aware of reports about the attack and was liaising closely with international partners.

The three senior Burkina Faso security sources with direct knowledge of the matter requested anonymity because they were not authorized to speak to the media.

A member of the Burkinabe armed forces is still missing following the ambush, one of the sources said.

The group went missing after armed individuals attacked a convoy of security forces and expatriates in an eastern region on Monday morning, the government said in a statement.

No one has claimed responsibility for the attack on a road leading to the vast forested reserve of Pama. The government said it had not identified the assailants, whom it described as “terrorists”.

The unit that was ambushed was part of a new joint army, police and forestry unit that had just gone through six months of training and was just starting operations in conservation areas around Pama on the border with Benin and Togo.

Burkina Faso, like much of West Africa’s Sahel region, faces a deepening security crisis as groups with links to al Qaeda and Islamic State carry out attacks on the army and civilians, despite help from French and U.N. forces.

Insurgents are believed to be holding a number of foreign hostages in Burkina Faso, Mali and Niger.

The worsening violence in Burkina Faso has led to one of the world’s fastest-growing displacement crises, the United Nations warned earlier in April. The Sahel now hosts nearly 3 million refugees and people displaced inside their own countries.