Spain: Stream of migrants stops as Morocco beefs up security 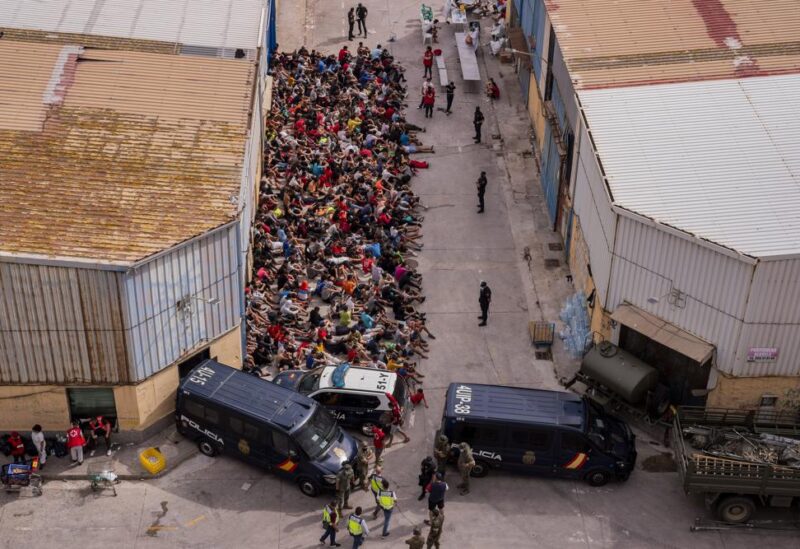 Unaccompanied minors who crossed into Spain are gathered outside a warehouse used as temporary shelter as they wait to be tested for COVID-19 at the Spanish enclave of Ceuta, near the border of Morocco and Spain, Wednesday, May 19, 2021. Social services for the small city perched on an outcropping in the Mediterranean buckled under the strain after more than 8,000 people crossed into Spanish territory during the previous two days. (AP Photo/Bernat Armangue)

CEUTA, Spain: Authorities in Ceuta, the Spanish enclave at the center of a humanitarian crisis and a diplomatic dispute between Morocco and Spain, said Thursday that no migrants crossed overnight into the city after security forces in the neighboring north African kingdom tightened the shared border.

Security forces clashed well into the night with dozens of mostly young men who had gathered in Fnideq, the Moroccan town across the border from Ceuta, hoping to follow the thousands who reached European soil in previous days.

The scuffles broke out when police tried to break up the groups of people who had gathered and set fire to a barricade blocking the street. The police moved back but later dispersed the group.

In previous days, the border between Morocco and Ceuta became porous following warnings from the Moroccan government to Spain that it would face consequences over Madrid’s decision to provide coronavirus treatment to the head of a militant group fighting for the independence of the Western Sahara region annexed by Rabat.

Brahim Ghali, head of the Polisario Front, flew into Spain in mid-April with an Algerian passport that had a false identity.

Spanish Defense Minister Margarita Robles on Thursday said that the country won’t accept being pressured with “the use of minors.”

“We are not going to accept being blackmailed,” Robles told Spain’s public radio. “Spain’s integrity is not negotiable and is not at stake. We are going to use all necessary means to guarantee the territorial integrity and to keep vigilance on our frontiers.”

“You don’t play with Spain,” she added.

Spain says that more than 8,000 people crossed into Spanish territory in 48 hours, although at least 5,700 had either been expelled in bulk pushbacks criticized by rights groups. Many of those who crossed also returned voluntarily after finding no shelter in Ceuta or possibilities to continue onto the European mainland across the Strait of Gibraltar. – Associated Press