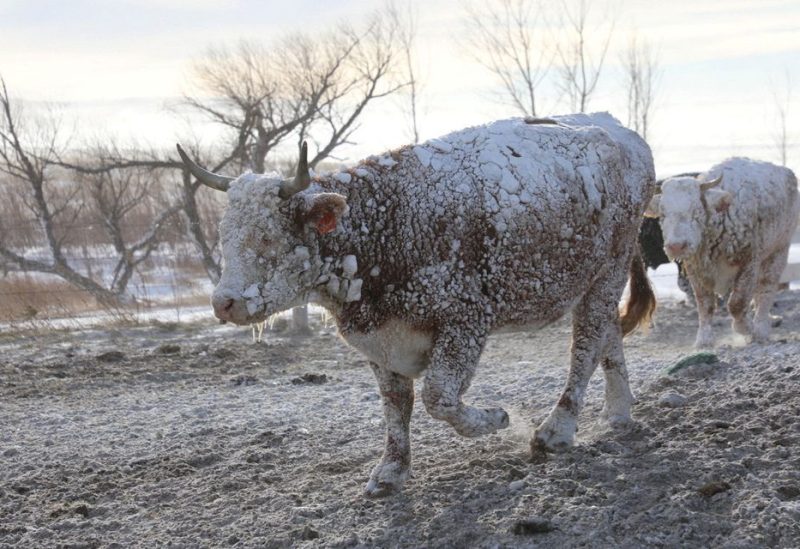 Cows walk in the snow following a blizzard in Sturgis, South Dakota, U.S. December 16, 2022, in this picture obtained from social media. Lonetree Ranch via REUTERS

Beginning on Wednesday, a severe winter storm is predicted to cover a significant portion of the United States with dangerously low temperatures, significant snowfall, and wind chills. This will make holiday travel plans for millions of Americans more difficult.

According to Bob Oravec, a forecaster with the National Weather Service, almost 200 million people in the Lower 48 states are under extreme weather alerts as cold air from the Northern Plains falls, causing temperatures to plummet.

Temperatures in Denver, for example, could drop on Wednesday from a high of 51 degrees to the low-single digits by evening.

“That’s the kind of changes that are going to be occurring as this front pushes southward: rapid temperature drops, sometimes 50 or more degrees colder than the previous day,” Oravec said. “It’s a pretty powerful, powerful system.”

The storm, fed by moisture from the Great Lakes, could dump up to a foot (0.3 meter) of snow on the Upper Midwest between Wednesday and Friday, with blizzard conditions stretching from the Northern Plains states to the Great Lakes region.

By Thursday night, a so-called “bomb cyclone” will likely form along the strong arctic front across the Great Lakes, sending pressure sharply lower in a 24-hour period. That could drive temperatures to record-breaking lows on the Gulf Coast and in Florida and the eastern United States by Friday, Oravec said.

The holiday travel season is shaping up to be the third-busiest in decades as nearly 113 million people could pack up and journey more than 50 miles from home beginning Friday, according to motorists group AAA.

Heavy rainfall, strong winds and potentially dangerous coastal flooding are in store for parts of the Northeast coastline and New England on Thursday and Friday, the weather service said, before the arctic front arrives and causes a freeze. As much as 3 inches (7.6 cm) of rain are predicted.

Officials are warning of severe travel disruptions due to the weather. With temperatures dropping more than 20 degrees Fahrenheit within hours, wet roads could freeze in a flash, the weather service said.

“We had a great Thanksgiving week with minimal disruption. Unfortunately, it’s not going to be that way going into Christmas,” U.S. Transportation Secretary Pete Buttigieg told MSNBC.

While beefed-up airline staffing and other improvements since Thanksgiving will make travel easier during the holiday season, “nobody can control the weather. That’s definitely going to be causing some disruptions,” Buttigieg said.

Americans traveling by air should prepare for delays and be flexible in their plans, while drivers also need to be prepared for severe weather, he added.