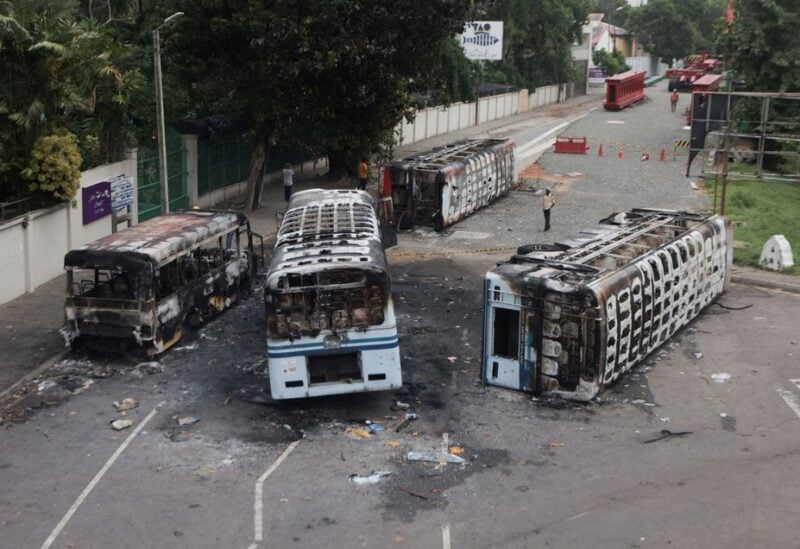 Burnt vehicles of Sri Lanka's ruling party supporters are seen after they were set on fire during a clash of pro and anti-government demonstrators near the Prime Minister's official residence, amid the country's economic crisis, in Colombo, Sri Lanka, April May 10, 2022. REUTERS/Dinuka Liyanawatte

Protesters and a leading trade group in Sri Lanka called for a new administration to take charge of the country, while the president appealed for calm after confrontations that lost eight lives and forced his brother to resign as prime minister.

Sri Lanka is in the midst of its worst economic crisis in history, with a severe currency shortage impeding basic imports such as drugs and fuel.

On Tuesday, protesters and a leading trade group in Sri Lanka called for a new administration to take charge of the country, while the president appealed for calm after confrontations that lost eight lives and forced his brother to resign as prime minister.

Sri Lanka is in the midst of its greatest economic crisis in its history, with the country’s currency depreciating at an alarming

For months, its tottering economy has been largely supported by India, which has provided assistance of more than $3.5 billion as the country began much-delayed talks with the International Monetary Fund (IMF) for a rescue package and also sought help from China.

China and India have long jostled for influence over Sri Lanka, a strategically located island situated off the southern tip of India with a population of 22 million people.

But the public’s patience ran out on Monday after ruling party supporters attacked an anti-government protest camp in the commercial capital Colombo, triggering a bout of clashes in which eight people died and more than 200 were injured.

Hours after the violence erupted, Prime Minister Mahinda Rajapaksa resigned in the hope of forming a unity government and the police imposed a nationwide curfew until 7 a.m. on Wednesday. The country’s Cabinet stepped down.

President Gotabaya Rajapaksa, the former prime minister’s younger brother, urged an end to the violence and his government outlined broad powers for the military and police to detain and question people without arrest warrants.

“All efforts will be made to restore political stability through consensus, within constitutional mandate & to resolve economic crisis,” the president said in a tweet.

IMF Sri Lanka mission chief Masahiro Nozaki said that virtual technical talks with Sri Lankan officials over a loan package that started on Monday would continue “so as to be fully prepared for policy discussions once a new government has been formed.”

Nozaki said in a statement that he was concerned about rising violence in the island country but remained “committed to assist Sri Lanka in line with the IMF’s policies.”

But protesters continued rallying for the president to quit, including at the “Gota Go Gama” tent village that was attacked by ruling party supporters on Tuesday.

“Now the whole island is supporting us,” said Lahiru Fernando, 36, who has camped at the anti-government protest site for weeks. “They kicked the wrong generation.”

Some experts said that if the president decides to step down in the face of growing pressure, the constitution outlines provisions for parliament to vote in a new leader.

“So, there will not be a power vacuum. There are also provisions for parliamentarians to appoint an interim government,” said Bhavani Fonseka, a senior researcher at the Centre for Policy Alternatives think tank.

“It is critical that a new government be appointed urgently to fill the current political vacuum,” the forum said in a statement.

U.S. State Department spokesperson Ned Price told reporters Washington was concerned by the deployment of the military and said the United States was deeply concerned about reports of violence against peaceful protesters.

Price called for a full investigation, arrest and prosecution of anyone instigating and involved in acts of violence and urged the government to address the Sri Lankan people’s discontent.

“We stress that peaceful protesters should never be subject to violence or intimidation, whether that’s on the part of the military force or civilian union units,” he said.

The attacks on government figures were in apparent reprisal for an incident just hours before the prime minister’s resignation.

The prime minister spoke to hundreds of supporters gathered at his official residence on Monday following reports he was considering stepping down.

After his remarks, many of them, some armed with iron bars, stormed a camp of those protesting against the government, beating them and setting fire to their tents.

Police fired water cannon and tear gas to disperse the skirmishers, after having initially done little to hold back the government supporters, according to Reuters witnesses.

Thousands streamed into the streets in celebration after Rajapaksa’s resignation, but the mood quickly became tense.

Protesters tried to tear down the gates of Temple Trees, his residence in the centre of Colombo, where broken glass and discarded footwear littered the surrounding streets on Tuesday, after some of the night’s worst clashes.

In all, a police statement said 38 houses and 47 vehicles were set on fire across the country.