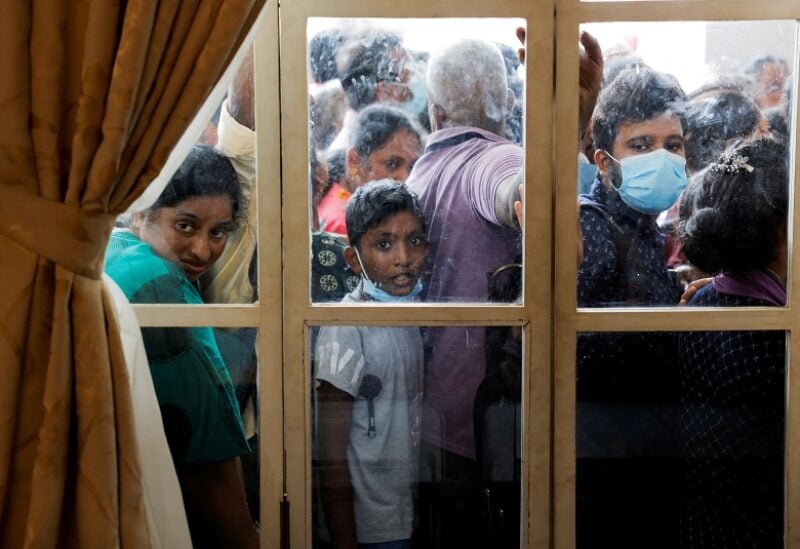 People wait to visit the President's house after demonstrators entered into the building, after President Gotabaya Rajapaksa fled, amid the country's economic crisis, in Colombo, Sri Lanka, July 11, 2022. REUTERS/Dinuka Liyanawatte TPX IMAGES OF THE DAY

While anger mounted against the powerful family for a debilitating economic crisis, Sri Lankan immigration officials said on Tuesday they prevented the president’s brother and former finance minister Basil Rajapaksa from flying out of the country.
It was not immediately clear where Rajapaksa, who also holds US citizenship, was trying to go. He resigned as finance minister in early April as street protests surged against shortages of fuel, food and other necessities, and quit his seat in parliament in June.
His elder brother Gotabaya Rajapaksa will resign as president on Wednesday to make way for a unity government, after thousands of protesters stormed his and the prime minister’s official residences on Saturday demanding their ouster. The president has not been seen in public since Friday and his whereabouts are unclear.
The Sri Lanka Immigration and Emigration Officers Association said its members declined to serve Basil Rajapaksa at the VIP departure lounge of the Colombo airport.
“Given the unrest in Sri Lanka, immigration officials are under tremendous pressure to not allow top-level people to leave the country,” K.A.S. Kanugala, chairman of the association, said.
“We are concerned for our security. So until this issue is resolved, the immigration officials working at the VIP lounge decided to withdraw their services.”
Pictures of Basil Rajapaksa at the lounge were carried by local media and widely shared on social media, with some people expressing anger at his attempts to leave the country. Basil Rajapaksa could not be immediately reached for comment and a close aide declined to give details.
A top official in the ruling party said on condition of anonymity that Basil Rajapaksa was still in the country.
The Rajapaksa family, including former Prime Minister Mahinda Rajapaksa, has dominated the politics of the country of 22 million for years and most Sri Lankans have blamed them for their current misery.
The tourism-dependent economy was hammered badly by the COVID-19 pandemic and a fall in remittances from overseas Sri Lankans, while a ban on chemical fertilizers damaged farm output. The ban was later reversed.
The Rajapaksas implemented populist tax cuts in 2019 that affected government finances while shrinking foreign reserves curtailed imports of fuel, food and medicines.
Petrol has been severely rationed, and long lines have formed in front of shops selling cooking gas. Headline inflation hit 54.6 percent last month, and the central bank has warned that it could rise to 70 percent in the coming months.
Sri Lanka’s sovereign dollar bonds extended recent declines on Tuesday to touch fresh record lows. The 2025 bond suffered the biggest losses, down as much as 1.125 cents with bonds trading between 25-27 cents on the dollar, Tradeweb data showed.
Protesters have vowed to stay put in the official residences of the president and the prime minister until they quit. Prime Minister Ranil Wickremesinghe did not move into his official residence, Temple Trees, after taking office in May, and was away when protesters set fire to his private home in Colombo on Saturday.
On Tuesday, seven people were hospitalized after a fight between two groups of protesters at Temple Trees, police spokesman Nalin Thalduwa said. It was not immediately clear what led to the fight.
Sri Lanka’s parliament will elect a new president on July 20, paving the way for an all-party government.