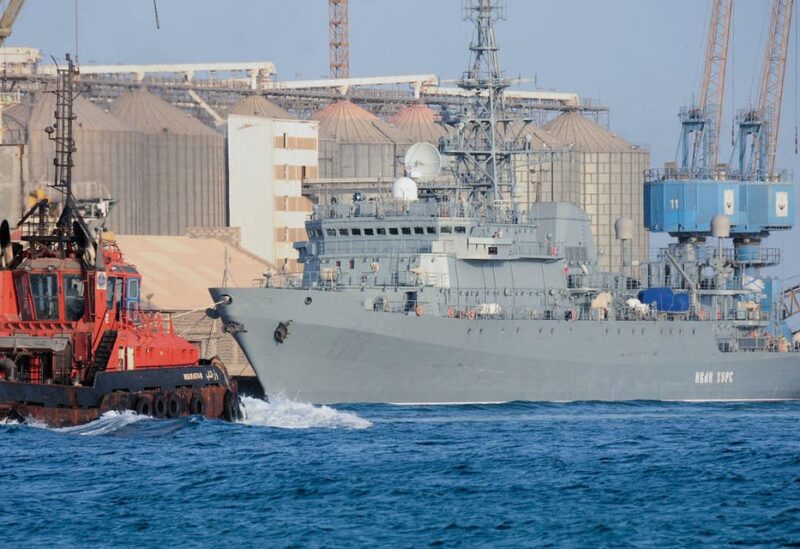 The Russian navy intelligence collection ship Ivan Khurs is docked at the port of the Sudanese city of Port Sudan, on April 10, 2021. (AFP)

Sudan’s Foreign Minister Mariam al-Mahdi said during a visit to Moscow on Monday that lawmakers in the African country would consider an agreement brokered by its ousted leader to establish a Russian naval base there.

No announcement was ever made by the Sudanese side but Russia said it had signed a 25-year agreement with Sudan in December last year to build and operate the base.

Last month a top military official in Sudan said the country was reviewing the document after some clauses were found to be “somewhat harmful.”

During a press conference with Russian counterpart Sergei Lavrov in Moscow on Monday, Mahdi said the legislature will study the agreement.

“We now have a government that is accountable to a new legislative mechanism,” she told reporters.

“The Sudanese legislature will discuss and consider this document,” Mahdi added.

Under the deal, Russia’s navy was to be allowed to keep up to four ships at a time at the base, including nuclear-powered vessels.

The base was to be staffed by up to 300 military and civilian personnel.

The lawmakers will evaluate whether the agreement is a “benefit to Sudan itself and the strategic goals pursued by Russia and Sudan,” Mahdi said in Moscow Monday.

For decades, the country was dependent militarily on Russia because of crippling sanctions imposed by Washington against the government of now ousted president Omar al-Bashir.

But since his 2019 overthrow, Sudan has moved closer to the United States, which removed Khartoum from its crippling blacklist last year.