Superyacht linked to sanctioned Russian oligarch is auctioned in Gibraltar 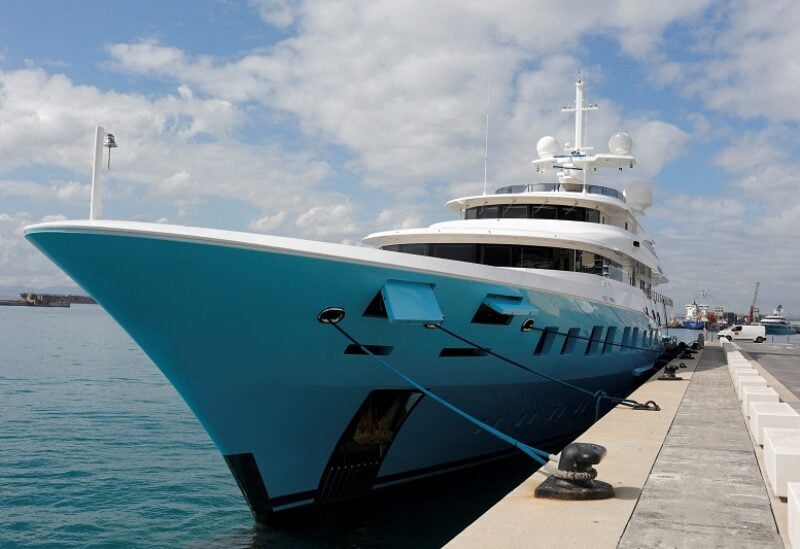 FILE PHOTO: The Axioma superyacht belonging to Russian oligarch Dmitrievich Pumpyansky who is on the EU's list of sanctioned Russians is seen docked at a port, amid Russia's invasion of Ukraine, in Gibraltar, March 21, 2022. REUTERS/Jon Nazca/File Photo

In the first sale of its kind since Russia invaded Ukraine in February, A $75-million superyacht linked to a sanctioned Russian steel billionaire was auctioned on Tuesday in Gibraltar, court sources said.
The Axioma was impounded by the Gibraltar authorities in March after US bank JP Morgan said its alleged owner Dmitry Pumpyansky had reneged on the terms of a $20 million loan.
The 72.5-meter vessel was auctioned by the Gibraltar Admiralty Court through a system of closed bids to be sent electronically by midday on Tuesday, a court spokesman said.
There was an “unexpected late surge by prospective buyers” around the world for the vessel, Nigel Hollyer, broker to the Admiralty Marshal of the Supreme Court of Gibraltar who led the auction, told the Guardian newspaper last week.
The boat sleeps 12 people in six cabins and boasts a swimming pool, a spa, 3D cinema and water sports equipment.
According to court papers seen by Reuters, JP Morgan lent 20.5 million euros to British Virgin Islands-listed Pyrene Investments Ltd. which was owned by Furdberg Holding Ltd. Furdberg’s owner was Pumpyansky, who acted as guarantor for the loan.
The papers said Pyrene Investments defaulted on the loan terms after Pumpyansky on March 4 transferred his shares in Furdberg to a third party and was then sanctioned, blocking the repayment of the loan.
The 58-year-old, who has an estimated fortune of $2 billion according to Forbes magazine, was sanctioned by Britain and the European Union shortly after the invasion of Ukraine.
Pumpyansky was until March the owner and chairman of steel pipe manufacturer OAO TMK, a supplier to Russian energy company Gazprom. The company said he had since withdrawn from the firm.
The Axioma is the first seized luxury yacht known to be auctioned since the West imposed sanctions on powerful Russians following the February invasion of Ukraine.
Sources close to the process told Reuters JP Morgan would only claim the 20.5 million euros owed and that any further proceeds from the sale would be up to the court to disburse.
Scores of yachts and houses linked to Russian oligarchs have been seized by world governments since the invasion. British and American authorities have said they would seek to send the proceeds of sold assets to Ukraine.
A Gibraltar government source said the money would likely be frozen rather than handed to anyone other than the oligarch.
A spokesman for JP Morgan declined to comment.
James Jaffa, a lawyer for British firm Jaffa & Co. which specializes in yachts and who had represented the Axioma before it was seized, said the vessel was likely to sell for “way below” 20 million euros.
After the auction, he said, the ship broker, crew wages, the shipyard and maintenance would need to be paid ahead of the bank.
A successful sale would, nonetheless, be a “benchmark” for other banks looking to recoup losses by auctioning the repossessed property and other assets of sanctioned oligarchs.
“Axioma will be a watershed moment for assets that have bank financing against them because all the other banks will realize that the asset can be sold and that they can get some or all of their money back,” he said.
He stressed, however, that assets without financial claims against them which were seized by governments because of sanctions alone would be harder to sell.