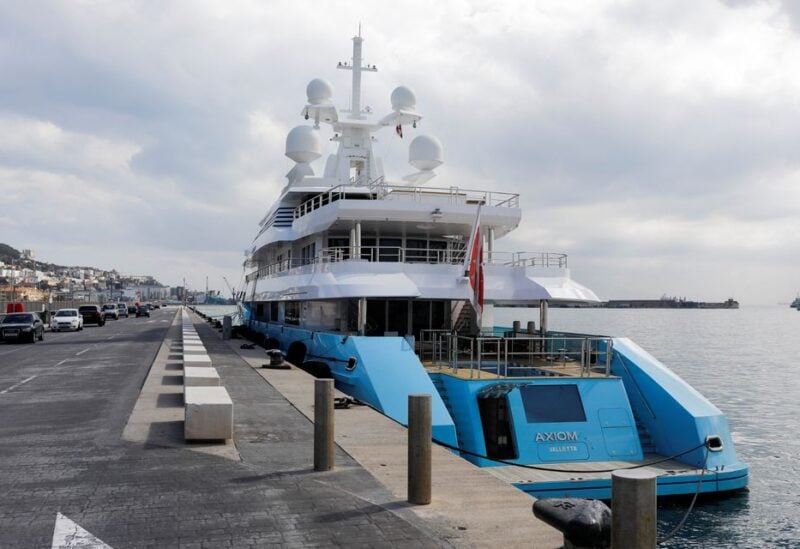 A superyacht tied to a sanctioned Russian billionaire sold for $37.5 million at auction in Gibraltar last month at the request of creditor JP Morgan, according to a court, in the first sale of its sort since Russia invaded Ukraine.

The 72.5-metre Axioma was confiscated by Gibraltar authorities in March after a US bank claimed that its supposed owner, a firm owned by Dmitry Pumpyansky, had breached the conditions of a 20.5 million euro loan.

The Office of Admiralty Marshal, the branch of Gibraltar’s Supreme Court mandated with conducting the sale in August, said an unidentified buyer had been selected.

The sale’s proceeds – $37,500,055 – would go towards settling the ship’s debts to creditors, and anyone with additional claims should come forward within the next 60 days, it said in a statement. The court would then decide what to do with any surplus funds, it added.

Pumpyansky, 58, was until March the owner and chairman of steel pipe manufacturer OAO TMK, a supplier to Russian energy company Gazprom.

He has an estimated fortune of $2 billion according to Forbes magazine and was sanctioned by Britain and the European Union shortly after the invasion of Ukraine.

According to court papers reviewed by Reuters, JP Morgan said it lent 20.5 million euros to British Virgin Islands-listed Pyrene Investments Ltd which was owned by Furdberg Holding Ltd. Furdberg’s owner was Pumpyansky, who acted as guarantor for the loan.

The papers said Pyrene Investments defaulted on the loan terms after Pumpyansky on March 4 transferred his shares in Furdberg to a third party and was then sanctioned, blocking the repayment of the loan. The Axioma had been used as collateral for the loan, the papers said.

Pumpyansky is not known to have commented publicly on the ownership of the yacht and Reuters could not reach him.

The sale of the yacht – with a swimming pool, spa and 3D cinema – generated significant interest since it was the first to be auctioned of scores of yachts linked to sanctioned Russian business leaders that were seized around the world, primarily by governments and because of sanctions over the Ukraine conflict.

James Jaffa, lawyer for British firm Jaffa & Co that specialises in yachts and represented the Axioma before it was seized, told Reuters at the time of the auction that once it was sold the sale fees would have to be paid, then crew wages and any shipyard and maintenance costs before JP Morgan received its share.

He said any money left over could be claimed by the ship’s previous owner.

He had said at the time he expected the vessel to sell for less than the value of the JP Morgan loan because of potential gaps in its maintenance and uncertainty about whether Pumpyansky might try to reclaim it eventually.

The Axioma was valued at $75m when it was listed for sale several years ago, according to the trade publication Superyacht Fan.