Supporters of Iraq’s Sadr in prayer rally amid political deadlock 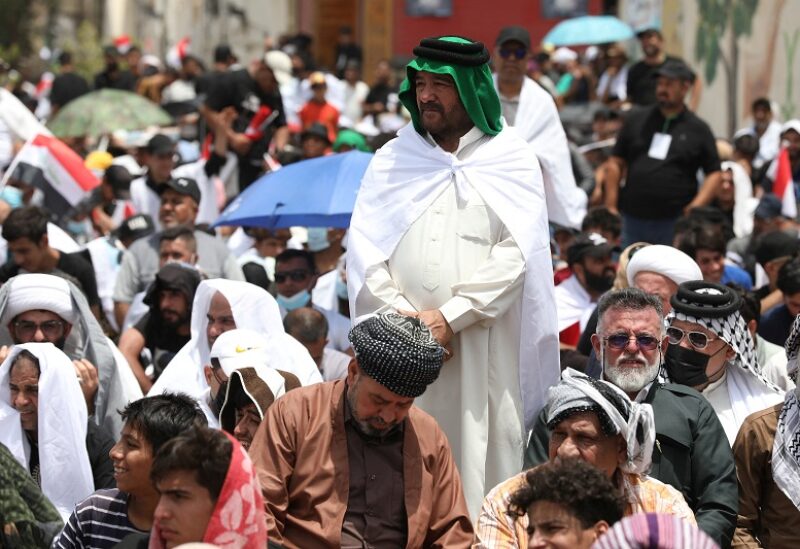 In a bid to influence stalled talks on forming a new government, thousands of supporters of Iraqi Shiite leader Moqtada Sadr gathered Friday for a Baghdad prayer service.
It was not clear if the influential cleric and politician would lead the sermon, or even if he intended to appear before supporters at the midday prayer, organized to take place on Al-Falah Avenue, in Sadr City.
After the 2003 US invasion that toppled dictator Saddam Hussein, this district of the capital was named after Mohammad Sadr, Moqtada’s father, a cleric who was assassinated in 1999 under Saddam’s rule.
The Friday prayers were ostensibly organized as a tribute to Sadr’s father.
In scorching heat, several thousand people gathered on Al-Falah Avenue, watched by a large security presence, according to a journalist.
Prayer mats in hand, participants waved Iraqi flags.
“We obey Moqtada Sadr, as we obey God and his prophets,” Sheikh Kadhim Hafez Mohammed Al-Tai said.
In addition to his religious authority — considered “sayyid,” a descendant of the Prophet Muhammad — Sadr exercises significant political influence in Iraq.
His parliamentary bloc won 73 seats in the October 2021 election, making it the largest legislative faction.
But since the election, talks to form a new government have stalled and the country remains mired in political crisis.
The various Shiite political factions, representing Iraq’s largest demographic, remain unable to agree on a new prime minister.
Sadr initially supported the idea of a “majority government” which would have sent his Shiite adversaries from the pro-Iran Coordination Framework into opposition.
The former militia leader then surprised many by compelling his deputies to resign from parliament in June.
This gesture was seen as a move to exert pressure on rival factions to speed up formation of a new government.
However, a month after this collective resignation, the process has not advanced.
The leaders of the Coordination Framework remain unable to find agreement on a new head of government and the oil-rich country remains mired in a socio-economic crisis, despite elevated global oil prices.