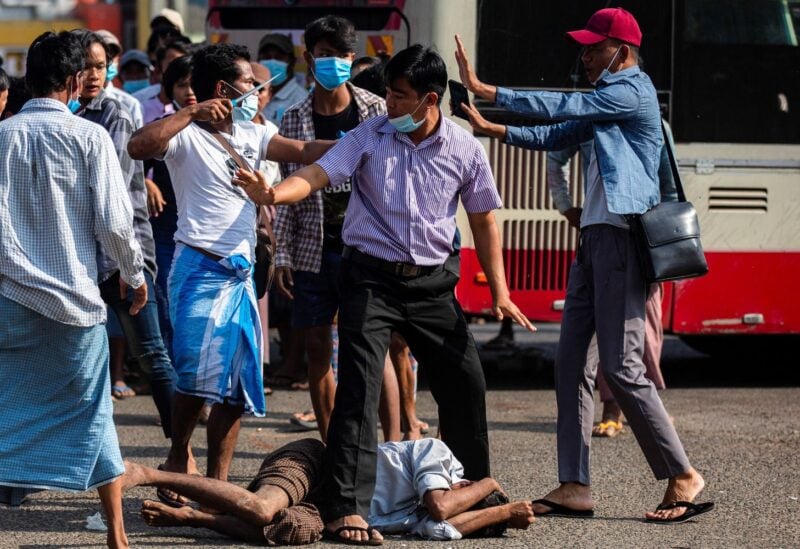 A military supporter points a sharp object as he confronts anti-coup protesters during a military support rally in Yangon, Myanmar, February 25, 2021. REUTERS/Stringer NO RESALES NO ARCHIVE

Supporters of Myanmar’s military, some armed with knives and clubs, others firing catapults and throwing stones, attacked opponents of the Feb. 1 coup on Thursday, as protests against the new junta continued in the country’s largest city.

Myanmar has been in turmoil since the army seized power and detained civilian government leader Aung San Suu Kyi and much of her party leadership after the military complained of fraud in a November election.

Protests and strikes have taken place daily for about three weeks, and students had planned to come out again in the commercial hub Yangon on Thursday.

But before many coup opponents congregated, about 1,000 supporters of the military turned up for a rally in the city center.

Some threatened news photographers, media workers and witnesses said, and scuffles soon escalated into more serious violence in several parts of the city.

Several people were set upon and beaten by groups of men, some armed with knives, others firing catapults and hurling stones, witnesses said. At least two people were stabbed, video footage showed.

In one incident, several men, one wielding a large knife, attacked a man outside a city-center hotel. Emergency workers helped the bloodied man after his attackers moved off but his condition was not known.

As dusk fell, dozens of riot police fired tear gas into a neighborhood in the city to disperse a crowd that had gathered at an administrative office to protest the appointment of a local official by the junta, according to a witness and live-streamed video.

The violence will compound worries about a country largely paralyzed by the protests and a civil disobedience campaign of strikes against the military.