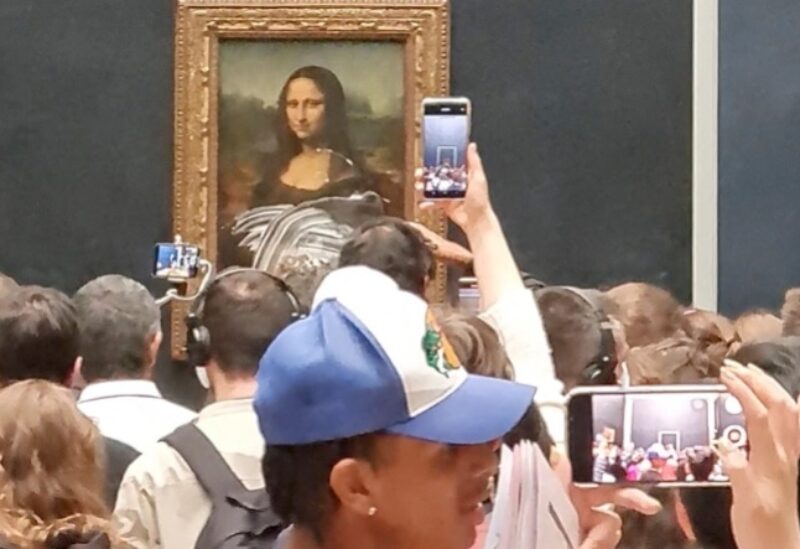 The Mona Lisa was attacked but unharmed when a visitor to the Louvre in Paris tried to smash the glass protecting the world’s most famous painting before smearing cake across its surface in an apparent environment-related publicity stunt.

The Paris prosecutor’s office said on Monday that the 36-year-old man was detained following Sunday’s incident and sent to a police psychiatric unit.

An investigation has been opened into the damage of cultural artifacts.

Videos posted on social media show a man in a wig and lipstick who arrived in a wheelchair. The man, whose identity was unknown, was also seen throwing roses in the museum gallery.

The perpetrator, disguised as an old lady, then jumped out of the wheelchair before assaulting the bulletproof glass.

The cake attack left a conspicuous white creamy smear but the famous work by Leonardo da Vinci was not damaged.

“Maybe this is just nuts to me,” posted the taker of a video of the incident’s aftermath, which shows a Louvre staffer cleaning the glass. “[He] then proceeds to smear cake on the glass, and throws roses everywhere before being tackled by security.”

Officials at the Louvre Museum in Paris declined to comment on Monday on the bizarre incident the day previous.

Another video posted on Twitter showed the same staffer finishing cleaning the pane while another attendant removes a wheelchair from in front of the Da Vinci masterpiece.

“Think of the Earth, people are destroying the Earth,” the man said in French in another video that showed him being led away by security from the Paris gallery. “Think about it. Artists tell you: think of the Earth. That’s why I did this.”

The 16th-century Renaissance masterpiece has been targeted before. The painting was stolen in 1911 by a museum employee, an event that increased its international fame.

The Mona Lisa has been behind glass since a Bolivian man threw a rock at the painting in December 1956, damaging her left elbow. In 2005, it was placed in a reinforced case that also controls temperature and humidity.

In 2009, a Russian woman angry at not being able to get French citizenship threw an empty teacup at the painting, which slightly scratched the case.

The Louvre is the largest museum in the world, housing hundreds of thousands of works that attracted some 10 million visitors a year before the COVID-19 pandemic.

Maybe this is just nuts to me💀but an man dressed as an old lady jumps out of a wheel chair and attempted to smash the bullet proof glass of the Mona Lisa. Then proceeds to smear cake on the glass, and throws roses everywhere all before being tackled by security. 😂??? pic.twitter.com/OFXdx9eWcM