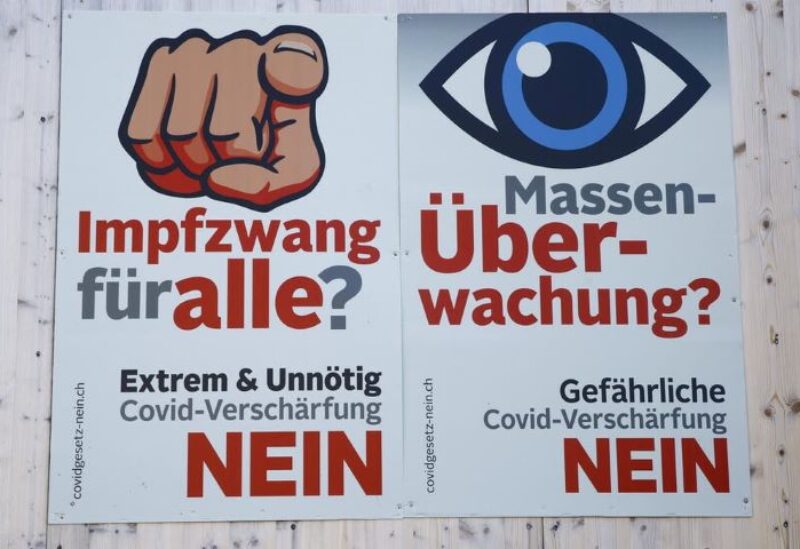 Posters reading: "Compulsory vaccination for all? Extreme and unnecessary - COVID tightening NO" and "Mass surveillance? Dangerous COVID tightening NO" are seen before Swiss voters decide about the federal government's pandemic response plan in a binding referendum, on a wall in Brienz, Switzerland November 9, 2021.

A poll for Swiss broadcaster SRG showed on Wednesday that Swiss voters are likely to support the government’s pandemic response plan in a binding referendum later this month.

According to the gfs.bern survey, 61 percent supported a law passed in March that expanded financial aid to people affected by the COVID-19 crisis and laid the groundwork for certificates required by the government to enter bars and restaurants and attend certain events.

That was the same level of support as in an October poll.

The survey found that 38% were opposed and 1% were undecided before the Nov. 28 referendum under the Swiss system of direct democracy, which was slightly more opposition than measured in the previous poll, which had a margin of error of 2.8 percentage points.

The poll found that in two other votes that day, the Swiss would support a labor union-backed proposal to boost the nursing profession by a two-to-one margin.

Voters were set to reject a proposal to choose federal judges by lottery from a pool of experts’ recommendations.

The government is opposed to the proposal, which seeks to reduce political pressure on the judiciary.