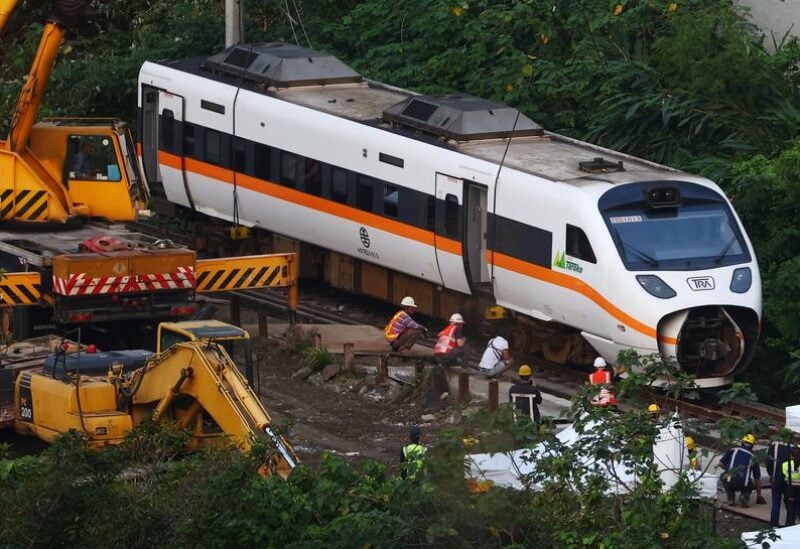 Rescuers work at the site a day after a deadly train derailment at a tunnel north of Hualien, Taiwan April 3, 2021.

Taiwanese prosecutors have sought an arrest warrant for a construction site manager whose truck is believed to have caused a train accident that claimed the lives of at least 50 people, as authorities warned on Saturday more bodies could be found in the wreckage.

Friday’s crash, Taiwan’s most disastrous rail accident in 7 decades, took place after an express train hit a truck that had slid down a bank next to the track from a construction site. The manager of the construction site is suspected of having failed to engage the brake properly.

Nearly 500 people were on board the train which was on its way from Taiwan’s capital, Taipei, to Taitung on the east coast, when it derailed in a tunnel just north of Hualien.

Lin Jinn-tsun, Ministry of Justice Department of Prosecutorial Affairs Director-General, told reporters on Saturday that prosecutors had applied to the court to arrest the manager on charges of causing death by negligence and forged documents.

Lin said “prosecutors will certainly step up investigation and understanding of the crimes or of other suspects involved in the case.” He told Reuters he expected the court to approve the arrest on Saturday.

Yu Hsiu-duan, head of the Hualien prosecutors office, said prosecutors were at the scene collecting evidence.

Workers on Saturday started moving the back part of the train – which was relatively undamaged having come to a stop outside the tunnel – down the track and away from the site of the accident.

The more heavily damaged sections of the train remained mangled inside the tunnel, where fire department official Wu Liang-yun said more bodies are likely to be found. “We’re still carrying out rescue work,” he said.

Forty people remain in hospital, among the 178 reported injured.

President Tsai Ing-wen visited hospitals in Hualien to speak to family members and survivors, extending thanks to non-governmental groups and ordinary people who had stepped forward to help victims of the accident.

“This shows the good side of Taiwanese society,” Ing-wen said at a military hospital.

The government has declared flags should be flown at half mast for 3 days in a show of mourning.

The mishap took place at the start of a long holiday weekend. The train was full with tourists and residents going home for the traditional Tomb Sweeping Day, when people clean the graves of their ancestors.

Before the Hualien accident, Taiwan’s worst train crash happened in 1948, when 64 people are estimated to have died when a train caught fire.