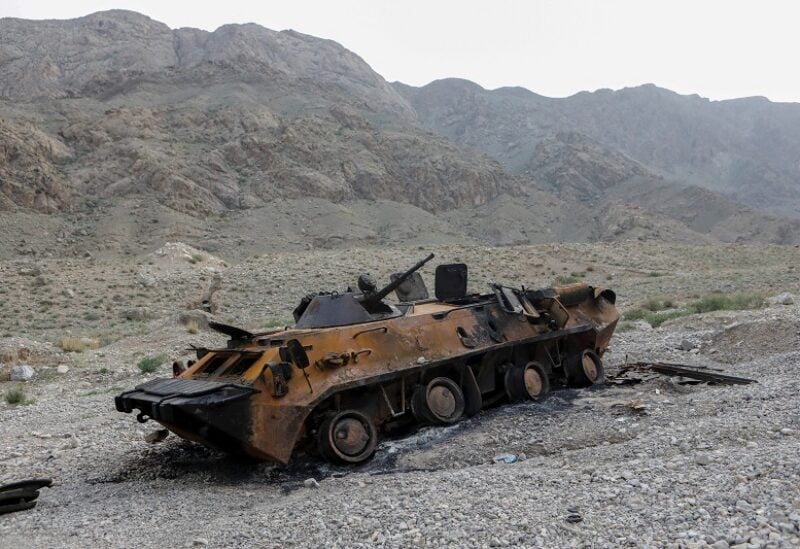 FILE PHOTO: A view shows a burnt armoured personnel carrier of Kyrgyz forces near Golovnoi water distribution facility outside the village of Kok-Tash in Batken province, Kyrgyzstan May 5, 2021. The clashes broke out last week along the frontier between Tajikistan's Sughd province and Kyrgyzstan's southern Batken province because of a dispute over a reservoir and pump, claimed by both sides, on the Isfara River. REUTERS/Vladimir Pirogov/File Photo

Two of Tajikistan’s border guards were killed after clashes broke out with its Central Asian neighbour Kyrgyzstan, said Local authorities on Wednesday
Fighting regularly flares up between the mountainous ex-Soviet republics that share a 970 kilometre-long (600 miles) border, with around half of the frontier contested.
Clashes last year left dozens dead, forced many more from their homes and raised fears of a border conflict.
Russia, which sees Central Asia as its sphere of influence and maintains a military base in Tajikistan, offered to mediate.
Tajik authorities in the border town of Isfara with a population of around 40,000 people said in a statement that “two border guards were killed and six were injured” in the clashes.
The statement, which was carried by Russian state news agency RIA Novosti, added that six civilians “were hit by shrapnel”.
Kyrgyzstan’s border guard service meanwhile reported that two of its officers and two civilians had been injured, including one who was in an “extremely serious condition”.
They accused Tajik soldiers of shooting at Kyrgyz patrols in the areas of Bulak-Bashi and Pasky-Aryk, in the southwestern region of Batken.
“Bearded men in black clothes… were seen shooting indiscriminately… at civilians, infrastructure, homes and private property,” the Kyrgyz border control press service said.
“The situation remains tense,” it added.
Tajik authorities later said Kyrgyz forces had opened fire on a Tajik border post with mortars and machine guns, in comments published by state news portal Khovar.
Negotiations to halt the fighting are ongoing, both sides have said.
Russian foreign ministry spokeswoman Maria Zakharova said Moscow was ready to “assist the parties in finding a long-term mutually acceptable solution to border issues”.
The volatile border region has seen similar flare-ups in recent months and in 2021 unprecedented clashes between the two sides killed 50 people.
You can now write for wionews.com and be a part of the community. Share your stories and opinions with us here.