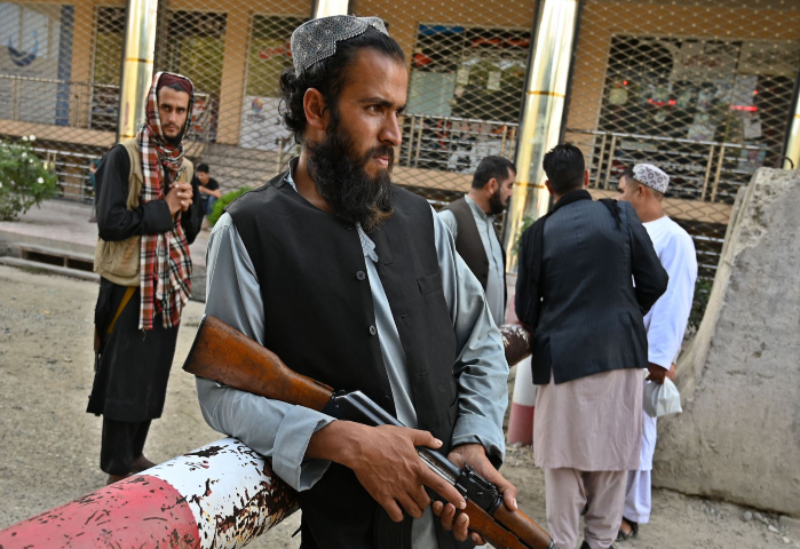 Taliban fighters stand at a gate

A spokesman for Taliban’s administration said on Saturday, that Taliban security forces killed six Daesh members in an overnight operation in the Afghan capital, Kabul.
Daesh members killed in the raid on their hideout were involved in two major attacks in recent weeks, one on a city mosque and the other on a tutoring institute in which dozens of female students were killed, said the spokesman, Qari Yusuf Ahmadi.
“They were the attackers of the Wazir Akbar Khan mosque and also … of Kaaj Institute,” said Ahmadi, who said one Taliban security force member was killed in the operation.
No group claimed responsibility for either attack.
The blast at the female section of the Kaaj Institute education center on Sept. 30 killed 53 people, most of them girls and young women.
On Sept. 23, at least seven people were killed and more than 40 wounded in blast near a mosque in Wazir Akbar Khan, a heavily fortified neighborhood once home to a “Green Zone” of embassies and foreign force bases.
Since the Taliban took over in 2021, they say they have focused on securing the country after decades of war.
However, a series of blasts have rocked the capital and other urban areas in recent months and the United Nations has said security is deteriorating.
The Afghan affiliate of Daesh, known as Daesh Khorasan, after an old name of the region, are enemies of the Taliban.
Fighters loyal to Daesh first appeared in eastern Afghanistan in 2014, and later made inroads in other areas.