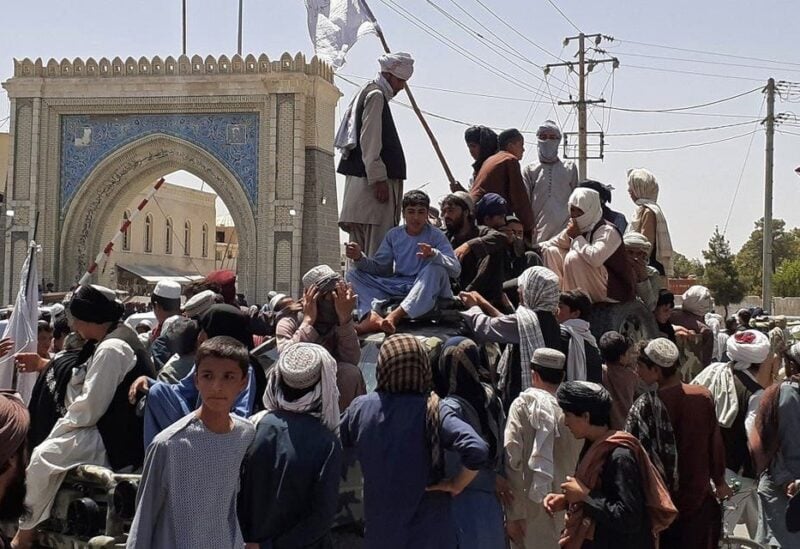 Taliban fighters stand on a vehicle along the roadside in Kandahar on August 13, 2021. (AFP)

The Taliban have released footage showing captured US-made Afghan military helicopters at Kandahar airport, until recently one of the most important US bases in the country.

The insurgents have been quick to show off their war spoils in the southern city – their spiritual birthplace and now one of the biggest prizes in a countrywide blitz that has left the capital Kabul surrounded by Taliban fighters.

The fall of Kandahar – Afghanistan’s second-biggest city – on Friday meant the insurgents once again had full control of their ethnic Pashtun heartland.

In footage posted on Taliban social media accounts Saturday, an insurgent is seen walking around a US-made Black Hawk military helicopter, which is in brown-green camouflage with Afghan Air Force markings, purportedly at a Kandahar airport hangar.

He then walks out and another Black Hawk is seen in the distance on the tarmac.

As he walks to the side of the hangar, two Russian military helicopters are seen as another person is heard saying “Mashallah” – an Islamic term of praise.

It was not clear if any of the helicopters were airworthy.

The Black Hawk inside the hangar was seemingly in storage, with a black sheet covering its windshield and its left engine apparently missing.

The two Russian helicopters outside the hangar were missing their blades, with a sheet covering the front of one airframe.

One of the fighters is heard claiming there are five military helicopters at the airport, and several jets.

AFP could not independently verify the number of helicopters and planes at Kandahar airport.

While the Taliban have been able to deploy other equipment on the battlefield, experts have cast doubt about the utility of captured helicopters and planes – if they are not just husks.

The Taliban are not known to possess the pilots or technical personnel needed to fly them.

But their capture is a symbolic boon for the insurgents and an embarrassment for the Western coalition ahead of the 20th anniversary of 9/11, the deadline for the American withdrawal.

The Kandahar video was released just a day after the Taliban captured the city from Afghan forces, which have lost all major cities except Kabul.

Images such as these have emerged from cities across Afghanistan that have fallen to the Taliban, showing insurgents posing with captured weapons and patrolling in vehicles once used by Afghan spies and elite forces.

Washington supplied much of that hardware to the Afghan military, to the tune of $88 billion since 2002.

With US troops all but gone, Taliban fighters are now flush with American-supplied arms and equipment – often left by retreating Afghan forces.