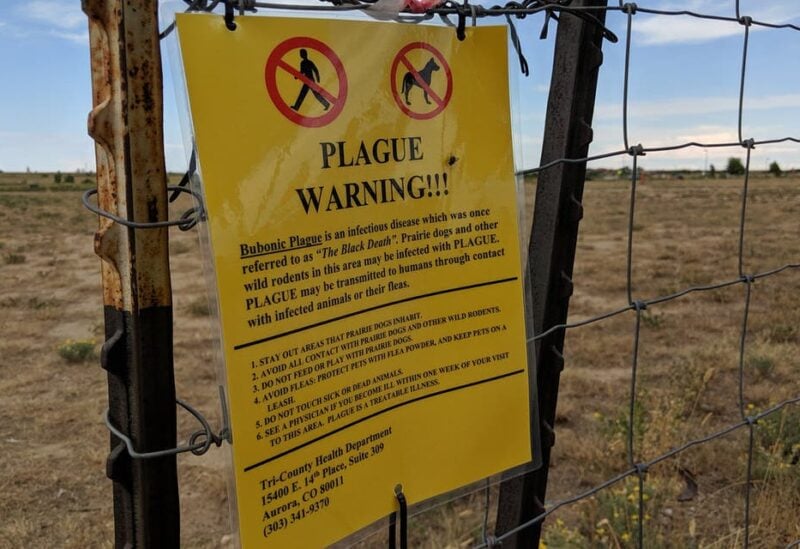 General view of a bubonic plague warning sign outside of the main gates of Dick's Sporting Goods Park before the match between the San Jose Earthquakes against the Colorado Rapids in August 2019. (Reuters)

A ten-year-old boy in the United States’ Colorado has died from “causes associated with plague”, according to the state’s officials, online news media The Hill reported on Saturday.

After conducting lab tests, Colorado’s Department of Public Health and Environment confirmed in a statement released on Thursday the presence of plague in the La Plata County, where the boy was a resident, from a sample of fleas.

They also found other confirmed cases in animals and fleas in five of the state’s other counties.

“In Colorado, we expect to have fleas test positive for plague during the summer months. Awareness and precautions can help prevent the disease in people. While it’s rare for people to contract the plague, we want to make sure everyone knows the symptoms,” said Deputy State Epidemiologist and Public Health Veterinarian for the CDPHE Jennifer House.

The plague, also known as the “Bubonic Plague” or “The Black Death” according to European Medieval history, is transmittable to humans through flea bites or via direct contact with infected animals.

In the Middle Ages, the plague killed millions of people in Europe and was one of the worst known pandemics in history, the Washington Post reported.

The CDPHE statement advised the state’s residents to avoid fleas by better protecting their pets, stay out of areas where wild rodents would live, avoid all contact with rodents, and consult a professional pest control company to eradicate fleas in or around the area of their home.