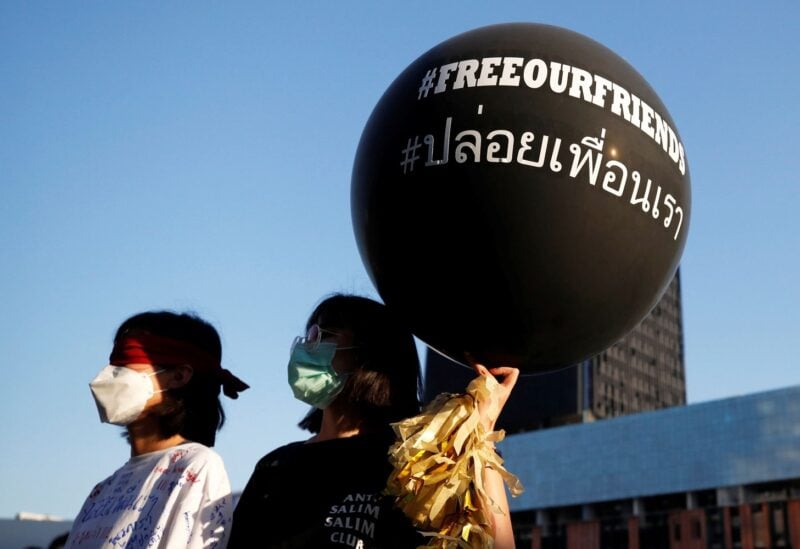 Pro-democracy protesters, one wearing a blindfold, display a hashtagged balloon at a rally demanding the release of arrested protest leaders and the abolition of Section 112 lese majeste law, in Bangkok, Thailand March 29, 2021. REUTERS/Jorge Silva

Hundreds of anti-government protesters gathered on Monday, defying police threats to make further arrests, a day after nearly 100 people were arrested for violating public health measures against the coronavirus.

Demonstrators called for the release of imprisoned activists, increasing the possibility of another clash between police and demonstrators calling for an end to the military’s political domination and reform of the powerful monarchy.

They yelled, “Free our mates!”

Police had earlier on Monday warned they would arrest more people participating in anti-government protests.

Piya said 99 people were detained in front of Government House on Sunday, citing a law banning large public gatherings to prevent the spread of the coronavirus.

Thai Lawyers of Human Rights, which is representing those detained on Sunday, said a court had agreed they could be released on bail.

The largely student-led movement has criticized the military for entrenching its position in civilian politics, especially since Prime Minister Prayuth Chan-ocha seized power in a coup in 2014 while serving as army chief.

The activists say elections held in 2019 were under rules designed to cement Prayuth’s hold on power. Prayuth and his coalition government allies say the vote was free and fair.

Prayuth on Monday told reporters the weekend arrests were justified.

“You have to look at the law. If I don’t take action, there will be disruption in traffic. We are just taking back space. There have been many warnings,” said Prayuth.

Hundreds of protesters have been arrested at rallies in recent months for breaching disease control and public order rules, but Sunday’s demonstration had the most arrests at a single rally.

Additionally, at least nine leaders of the movement are jailed pending trial under a law against insulting the Thai monarchy, which carries a maximum 15-year penalty.