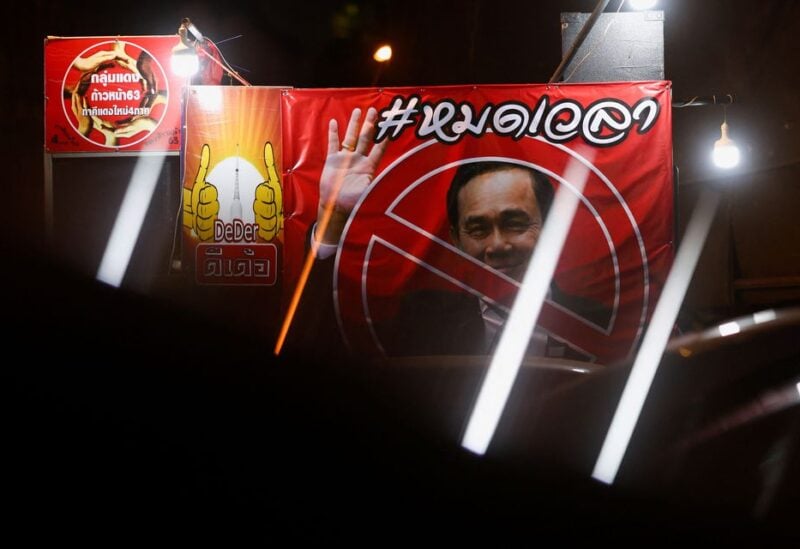 Protesters (not pictured) gather next to a picture of Thailand's Prime Minister Prayuth Chan-ocha outside the Government House, as the Constitutional Court suspended Prime Minister Prayuth Chan-ocha from official duties on Wednesday, after deciding to hear a petition to review his legally mandated eight-year term limit, in Bangkok, Thailand, August 24, 2022. REUTERS/Athit Perawongmetha

Thailand’s army leader, himself a former army commander, signaled his support for suspended Prime Minister Prayuth Chan-ocha on Thursday, as a court considers Prayuth’s future following an opposition challenge to his ability to continue in power.

The Constitutional Court removed Prayuth, 68, from the presidency on Wednesday, pending a reconsideration of his legally mandated eight-year term limit.

The controversy over Prayuth’s tenure could revive old rivalries at the root of nearly two decades of intermittent political turmoil, including two coups and violent protests, stemming from opposition to military involvement in politics and demands for greater representation as political awareness grows.

Army chief General Narongpan Jittkaewtae told reporters Prayuth was “a soldier and a gentleman” for accepting the court’s decision to take up the petition filed by the main opposition party, which Prayuth ousted from power when he was army chief in a 2014 coup.

“I have to admire him, he is a gentleman, a leader and a model soldier. The court ordered and he followed. This is a good thing for society, for our country and proper conduct in a democracy,” Narongpan said.

The opposition Pheu Thai party argues that Prayuth has served his maximum of eight years, as stipulated in a 2017 constitution drafted during military rule, because his time as junta chief should count.

The court suspended Prayuth until it delivers a verdict on the petition. It has not given a date.

Prayuth has made no public comment on the decision. He stayed at home on Thursday but attended a defence ministry meeting via video conference, a ministry official said.

He has retained his cabinet post of defence minister.

A government spokesperson said on Wednesday Prayuth respected the court’s decision adding that the government would function as normal.

Deputy Prime Minister Prawit Wongsuwan, 77, also a royalist and ex-army chief with longstanding ties with Prayuth, has taken over as interim leader.

Prayuth ruled as head of a military council after he overthrow an elected government in 2014 led by Yingluck Shinawatra, the sister of former prime minister and telecoms tycoon Thaksin Shinawatra.

Both Yingluck and Thaksin, who was ousted in a 2006 coup, live abroad in self-exile.

Prayuth became a civilian prime minister in 2019 following an election. Thailand’s next general election is due by May next year.

“For the sake of the country, General Prayuth should resign so we can begin the process of selecting a prime minister based on the constitution as fast as possible,” Chonlanan said in a post on Facebook.

Prayuth’s supporters argue that his term started in 2017, when a new constitution took effect, or after the 2019 election, meaning that he should be allowed to stay on until 2025 or 2027, provided he retains backing in parliament.

Even if the court rules Prayuth’s term has reached its limit, his largely pro-military coalition has the votes in parliament to choose a new prime minister.

Public reaction to Prayuth’s suspension was muted but a small group of democracy activists set off fireworks near the prime minister’s residence late on Wednesday and tussled with police.

“Prawit has always been with Prayuth … there is not a lot of differences between them,” youth activist Patsaravalee Tanakitvibulpon told Reuters.

“What the regime is doing is swapping the player but the same network remains in power,” she said.

The turmoil may shake investor confidence in Southeast Asia’s second-largest economy, the Bangkok Post reported, though it cited the chairman of the Thai Chamber of Commerce as saying the sector remained upbeat about prospects for growth.