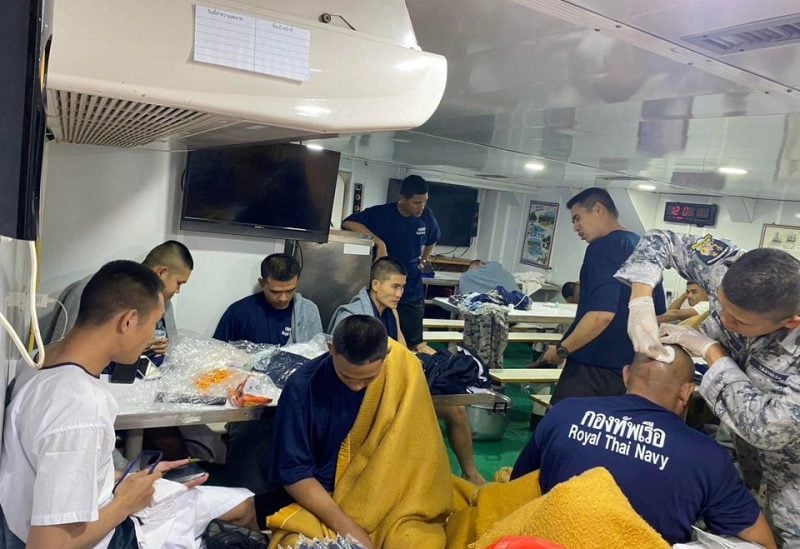 In a race against time to find 30 missing marines who abandoned a warship that sank over the weekend in rough waters, Thailand sent aircraft, boats, and rescue crews off its central coast on Tuesday.

A U.S.-built corvette that has been in service since 1987, the HTMS Sukhothai, sank in the Gulf of Thailand due to four-meter (13-foot) waves and severe winds.

The vessel suffered an engine malfunction as it took on water and went down just before midnight on Sunday about 20 nautical miles off the coast, said navy spokesperson Admiral Ruth Manthatpain.

The boat was carrying 105 military personnel, of whom 75 were rescued but dozens more had to abandon ship in rafts and wearing life jackets.

Vice Admiral Pichai Lorchusakul, the regional navy commander, said finding the men on Tuesday would be critical given the time they had been exposed to the elements.

“Life jacket, life buoy and their floating technique allow us 48 hours to save their lives,” he said late on Monday. “We will try to do as much as we can to save them.”

Weather conditions were better on Tuesday, he added, as the navy and air force deployed several ships, unmanned aerial vehicles (UAVs) and helicopters to locate the 30 marines still missing.

One of the men was found late on Monday in waters off Prachuap Khiri Khan province, clinging to a buoy.

“He was floating in the water for 10 hours. He was still conscious, so we could take him out of the water safely,” said Captain Kraipich Korawee-Paparwit, commander of the HTMS Kraburi, one of the warships involved in the search mission.

Relatives of the missing gathered at rescue centres awaiting news of loved ones.

“I’m very concerned about everything with these weather conditions and wind. It’s now been too long (for them to be in the sea) to struggle against the tides and weather,” said Malinee Pudphong, aunt of a missing 21-year-old marine, Saharat Esa.

Though military accidents, often with aircraft, are not uncommon in Thailand, incidents involving navy vessels have been rare in recent years.