Thousands detained in Russia for protesting against partial mobilisation of civilians 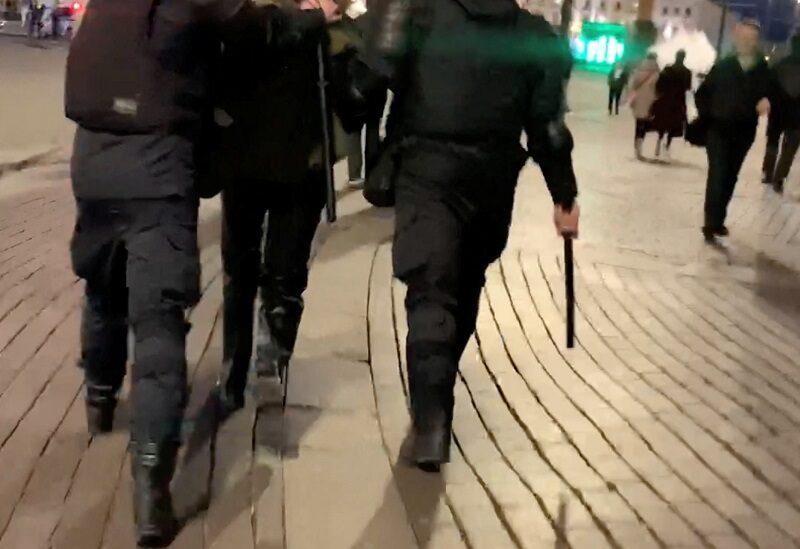 Security forces detain a demonstrator during a protest against the mobilisation of reservists ordered by President Vladimir Putin, in Saint Petersburg, Russia September 21, 2022 in this screengrab taken from social media video. VIDEO OBTAINED BY REUTERS THIS IMAGE HAS BEEN SUPPLIED BY A THIRD PARTY. MANDATORY CREDIT. NO RESALES. NO ARCHIVES.

Russian security forces detained more than 1,300 people denouncing mobilisation on Wednesday, a rights group said, hours after President Vladimir Putin ordered Russia’s first military draft since the second world war. The OVD-Info protest monitoring group said that it had collated information from 38 Russian cities, according to which over 1,311 people had been held by late evening.

Photos released on OVD-Info’s Telegram channel showed police in Saint Petersburg using batons against protestors. Videos emerged from Moscow where several protestors can be seen being carried away by the police. A crowd gathered at Isakiivskiy Cathedral and videos show police attempting to contain it behind barriers, amid chants of “no mobilisation”.

OVD-Info said that at least 502 were detained in Moscow and 524 in St Petersburg. Unsanctioned rallies are illegal under Russia’s anti-protest laws.

“In a number of regions, there were attempts to stage unauthorised actions which brought together an extremely small number of participants,” Volk was quoted as saying by The Guardian.

“These were all stopped. And those persons who violated laws were detained and taken to police stations for investigation and establish their responsibility.”

Meanwhile, the Moscow prosecutor’s office warned that organising or participating in protests could lead to up to 15 years in prison. This was the first full-fledged anti-war display in Russia ever since the military intervention began in Ukraine in February.

Several people are trying to leave the country, with prices of one-way flights out of Russia skyrocketing and selling out fast on Wednesday after Putin ordered the immediate call-up of 300,000 reservists.

The Vesna opposition movement called for protests, saying, “Thousands of Russian men, our fathers, brothers and husbands, will be thrown into the meat grinder of the war. What will they be dying for? What will mothers and children be crying for?”