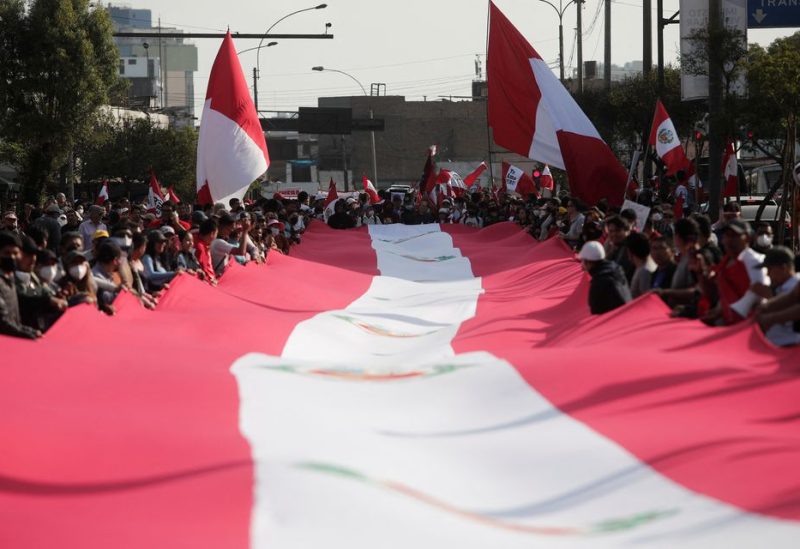 People carry a Peruvian flag, during a protest against the government of Peru's President Pedro Castillo, in Lima, Peru November 5, 2022. REUTERS

On Saturday, thousands of Peruvians marched to the streets around the country to call for the resignation of leftist President Pedro Castillo, whose administration is being investigated for corruption.

Castillo has referred to individuals who disagree with his administration as “reactionaries” and “the enemy of the people.”

Police with helmets and plastic shields launched several tear gas canisters in an attempt to disperse the crowds. There were no immediate reports of injuries.

Castillo, who took office in July last year, has already survived two impeachment attempts. Opposition legislators are seeking a fresh trial against the president even though Congress recognized it would not gather sufficient votes.

“We see a government involved in corruption and Congress doesn’t react,” said Lucas Ghersi, a conservative lawyer who is one of the organizers of the march, called Peru Reacts.

In October, Peru’s attorney general filed a constitutional complaint against Castillo with Congress that the right-wing opposition hopes will end in his removal from office.

Discontent has been rising in Peru. “I come for my children, for my grandchildren, because this government is becoming hell,” said Maria del Pilar Blancas.

“They want us to become one more Venezuela,” she said, referring to the South American neighbor that went into an economic freefall.

Similar protests were held in other cities across the country, including Arequipa, Chiclayo, Cusco and Trujillo, according to reports and images broadcast by local television channel Canal N.